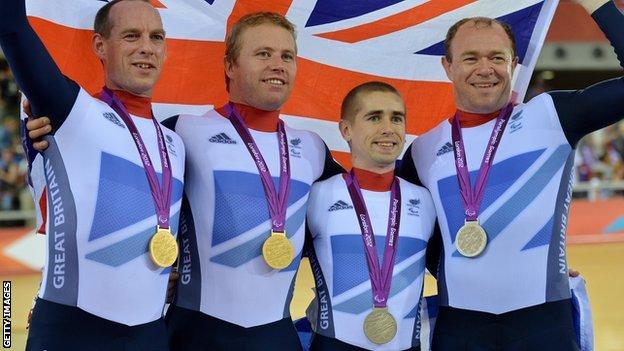 A sport-by-sport round-up of how ParalympicsGB athletes perform on Day Four of the 2012 Paralympic Games in London.

David Devine qualifies for the T13 1500m final as one of the fastest losers, setting a personal best in the process.

Stef Reid takes SILVER in the long jump F42/44, setting a Paralympic record of 5.28m for her class.

Tracey Hinton finishes third and fails to qualify from her semi-final in the T11 200m.

ParalympicsGB lose 5-0 to Greece in the BC3 mixed pairs and then lose 6-2 to South Korea.

In the BC4 mixed pairs, ParalympicsGB win 11-0 against Slovakia and then lose 4-1 to Canada.

ParalympicsGB win their first mixed team BC1-2 match 8-4 against Argentina and their second game 5-4 against Portugal.

Anthony Kappes and pilot Craig Maclean win GOLD in the all-British final of the men's individual B pursuit, beating Neil Fachie and Barney Storey, who take SILVER, in two races. Kappes and Maclean set a world record of 10.050 seconds in their heat.

Aileen McGlynn and her pilot Helen Scott win BRONZE in an all-British clash in the women's individual B pursuit. They came out on top against Lora Turnham and pilot Fiona Duncan by just over a second in a tight pursuit.

Strong favourite Sophie Christiansen wins GOLD in the grade Ia individual dressage with a score of 82.750.

Deborah Criddle wins SILVER in the grade III individual dressage with a score of 71.267.

Sophie Wells takes SILVER in the grade IV individual dressage with a score of 76.323.

ParalympicsGB draw their pool A clash 0-0 with Argentina.

ParalympicsGB women's team win their preliminary match 3-1 against Brazil while the men's team lose 7-3 to Finland.

Nicholas Beighton and Samantha Scowen finish fourth in the final of the mixed double sculls.

ParalympicsGB men win their preliminary pool A match 3-0 against Morocco.

The women's side lose their encounter against Japan 3-0.

James Clegg takes BRONZE in the final of the 100m butterfly S12, with Hannah Russell also taking BRONZE in the women's version with a personal best of 1:08.57.

Rhiannon Henry finishes fourth in the final of the 100m freestyle S13, missing out on a medal by one 10th of a second.

Jessica-Jane Applegate wins GOLD in the final of the 200m freestyle S14 with a Paralympic record time of 2:12.63. Natalie Massey finishes sixth. Team-mate Chloe Davies earlier missed out on a place in the final.

Daniel Pepper and Ben Procter finish seventh and eighth respectively in the final of the 200m freestyle S14 heat. Team-mate Craig Rodgie earlier misses out on the final by less than a second.

Heather Frederiksen finishes sixth in the women's 50m freestyle S8 with a time of 31.93.

Will Bayley takes SILVER in the class 7 final after losing 3-1 to Jochen Wollmert.

The men's side were victories 87-58 against Poland, with Terry Bywater scoring 22 points.

In the men's doubles round of 32, Marc McCarroll and Gordon Reid win 6-3 6-1 while Alex Jewitt and Dave Phillipson emerge as 6-3 6-2 victors.

Peter Norfolk dominates his quad singles round of 16 match 6-0 6-0.

Gordon Reid wins his round of 32 men's singles clash 6-0 6-0 against Brazilian Daniel Alves Rodrigues and Dave Phillipson wins 6-3 6-2 at the same stage.