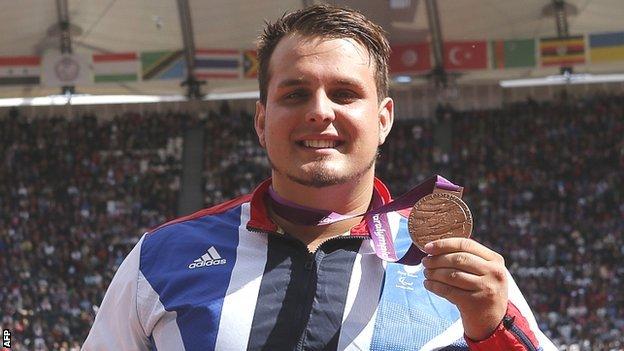 The 21-year-old, who won bronze in the shot put, threw a British record 46.14m to hand GB its third title in London.

However, it was disappointment for Shelly Woods, who could only finish eighth in the T54 5,000m final.

"I'm probably the happiest guy on planet," said Davies. "It was a tough competition, I dug in deep. I'm speechless. This crowd and everything - unbelievable."

Iran's Mehrdad Karam Zadeh made it a nerve-wracking wait for the Welshman when he produced a huge final throw - but the mark was recorded at 44.62m.

"He was not going to go without a fight," added Davies, who was born with hemilia in his right leg. "I saw the final throw land. When I found out it was a few centimetres short I was relieved."

The 27-year-old Briton admitted she was initially unhappy with her performance in the long jump.

"My emotion was of disappointment," said Reid. "But I realised these Games are about inspiration and legacy."

Great Britain's momentum continued in the evening, when sprinter Ballard, who has cerebral palsy, took silver in the T36 100m, to add to the bronze he won in Beijing.

The 33-year-old was leading after 60m but Russia's Evgenii Shvetcov stormed through to take gold.

Moments later, Clegg, who has peripheral vision in her left eye, and guide Mikail Huggins both won silver in the women's T12 100m. The London Paralympics marks the first time guides have also been awarded medals.