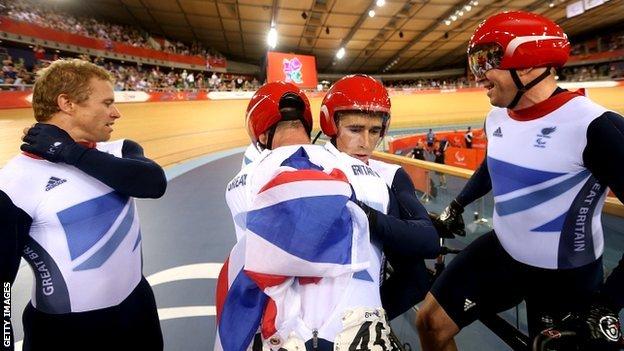 We are only halfway through the Paralympic cycling programme and the Great Britain team already has more medals than it did at this point in Beijing - the only difference is the colour of the medals.

With the track events completed, the squad has certainly performed as we would have expected them to and won 15 medals, compared with 12 in Beijing. There we won 11 gold and one silver whereas here it is five gold, seven silver and three bronze - but I think that is part of a trend we are also seeing across sports like swimming and athletics.

Some of the performances from the other nations have been outstanding and there were 25 world records set over the course of the four days at the velodrome - some of those by huge margins, which shows how much things are moving on.

Before Beijing, Australia was the powerhouse when it came to Paralympic cycling. Since then, Britain's cyclists have raised the bar and now other countries are doing the same. It looks like China and Spain are among those becoming stronger and it will be interesting to see which nations go away and improve their programmes to drive the next wave of improvement before Rio in 2016.

There have been plenty of great moments so far and, as in so many other sports at London 2012, the crowd have played their part. They have been very knowledgeable and have really got into it and supported every athlete who has had a good ride.

For me, the tandem sprint final on Sunday was a real highlight. I love the event anyway but to see the way Anthony Kappes and Craig MacLean held themselves together after the problems they had in the kilo on Saturday, and how upset Neil Fachie and Barney Storey were at not being able to go up against them in the kilo, was memorable.

When they rode against each other in the sprint there was no quarter given and the sprinting was fantastic.

Jon-Allan Butterworth may have deposed me from the team but what he did, especially in the pursuit, was special and seeing Sarah Storey, who narrowly missed out on a place in the Olympic team pursuit squad, putting in some superb performances on the track was brilliant.

The biggest disappointment for me was with the sport's governing body, the UCI. I think it needs to clarify its rules to make sure we don't have a repeat of the incidents that affected Anthony and Craig and also Jody Cundy in his kilo when it comes to false starts.

There is inconsistency in the rulebook and the lack of clarity confuses not only the riders but the spectators as well.

Now we move on to the road events at Brands Hatch and there are more chances of medal success through the likes of David Stone, Rachel Morris and Karen Darke, who are road specialists, as well as Sarah Storey and Mark Colbourne, who have already won medals on the track.

Unfortunately we are leaving the fantastic velodrome atmosphere but I hope spectators can get involved and lift the GB competitors to even more success.