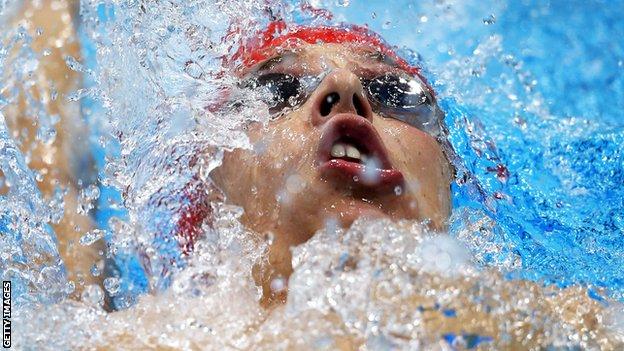 A sport-by-sport round-up of how ParalympicsGB athletes perform on Day Five of the 2012 Paralympic Games in London.

Jade Jones fails to qualify for the women's 400m T54 after finishing sixth in her heat in a time of 59.14 seconds.

ParalympicsGB mixed pairs BC3 team of Jessica Hunter, Jacob Thomas and Scott McCowan beat Canada 9-1 in their pool A match.

Peter and Stephen McGuire, ranked number two in the world, succumb to Brazilian pairing of Eilseu Dos Santos and Jose Pinto Dirceu 3-2 in a titanic tussle for what would have been a place in the BC4 Pairs final.

GOLD MEDAL - Natasha Baker wins her second gold of the London 2012 Paralympic Games after posting the highest ever score in grade II freestyle on her horse Cabral (82.800%).

BRONZE MEDAL - Lee Pearson misses out on matching the modern-era record of 11 gold medals currently held by Tanni Grey-Thompson as he wins bronze on his horse Gentleman with a 74.200% routine in the Freestyle Grade 1b event.

ParalympicsGB men lose 7-1 against Ukraine in their second Pool B match and will not feature in the semi-finals having lost 3-0 to Brazil in their opening game.

ParalympicsGB men lose 3-0 against Germany in their third Pool A match, they had beaten Morocco 3-0 in their second match.

Helena Lucas eases to victories in races five and six of the one-person keelboat (2.4MR) and is in top spot going into the final five races.

John Robertson, Stephen Thomas and Hannah Stodel finish fourth in race five of the three-person keelboar (Sonar). But a poor sixth race saw them finish second last in the field of 14. They currently lie seventh overall with five races remaining.

BRONZE MEDAL - Great Britain win bronze in the women's 4x100m freestyle 34pts final after missing out on the silver to the United States by just 0.14 seconds. Australia take gold.

Thomas Young, making his Paralympics debut for GB, finishes seventh in the men's 50m freestyle S8 final with a time of 27.71.

Jim Anderson, who won bronze in the men's 100m freestyle S2 in Beijing, finishes eighth in the final with a time of 2:31.33.

Josef Craig finishes fourth in the final of the men's 100m freestyle S7 with a time of 1:02.20. Team mate Jonathan Fox, who won a gold medal on the opening day of the Paralympics in the 100m backstroke S7, finishes fifth, just six hundredths of a second behind Craig.

Matt Whorwood, who won bronze on Saturday in the 400m freestyle S6, also qualifies fifth overall in a time of 2:53.82.

Sara Head misses out on the bronze medal in the women's class 3, losing her match 3-1 against Slovakia's Alena Kanova.

Ross Wilson loses out on a bronze medal, after Sweden's Emil Andersson secures a 3-0 victory.

ParalympicsGB women lose 67-50 against Canada but guarantee at least a fourth-placed spot and quarter-final place.

Marc McCarroll and Gordon Reid are through to the quarter-finals of the men's doubles beating Belgium's Mike Denayer and Joachim Gerard 6-4 6-3.

Alexander Jewitt and Dave Phillipson are out of the men's doubles after a 6-0 6-2 defeat by Stephane Houdet and Michael Jeremiasz of France.

Lucy Shuker beats Emmy Kaiser of the United States in straight sets 6-0 6-2 to reach the quarter-finals of the women's singles.