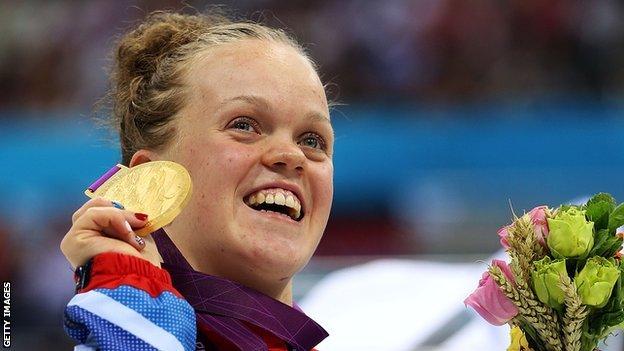 The 17-year-old Briton, who defended her 400m freestyle title on Saturday, broke her own record, set in the heats, to win in three minutes 5.39 seconds.

"It's amazing in front of this home crowd," Simmonds told BBC Sport.

"I'm so pleased and I don't know what my coach has done to get me in this shape."

Anastasia Diodorova held a 10m advantage heading into the final length, but freestyle-specialist Simmonds powered past the Russian.

"I did worry about her, but my front crawl is my best event and I just had to do all I could," said Simmonds, who received her medal from Prime Minister David Cameron.

"I have two races to focus on now, the 50m and 100m [which Simmonds won in Beijing] and hopefully I'll feel good when I wake up tomorrow."

"That was probably the perfect race from Ellie tonight. Her third consecutive world record, she's 17, she's coping with the pressure of everything around her and doesn't panic when others get away from her. Now the pressure is off her a little bit and she can enjoy her swimming."

Waddon missed out on silver by only a hundredth of a second.

"I can't believe it was so close and I'm annoyed, but I'm happy to get a medal," she told BBC Radio 5 live.

Kindred, 34, who finished a disappointing fourth in the SB7 100m breaststroke final on Saturday, found China's Xu too tough a rival in the final.

"This is the biggest stage in the world and you have to swim personal bests to stay on top and I did with a European record [2:41.50], but Xu swam really well and I have to give him that," said Kindred.

Great Britain's women's 4x100m freestyle relay team rounded off the action on day five of the Games with a bronze medal.

Stephanie Millward, Claire Cashmore, Susie Rodgers and Louise Watkin were narrowly beaten to silver by just 0.14 secs by the USA, with the Australians winning in a new world record time of 4:20.39.