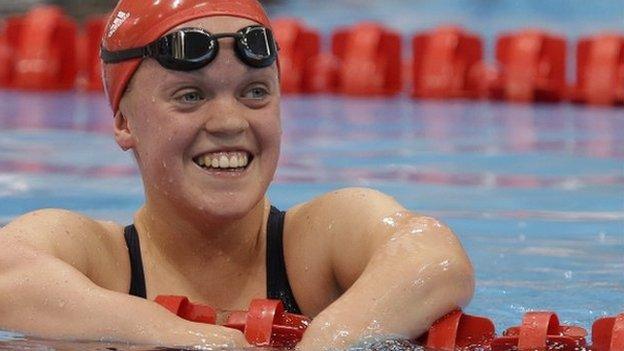 Victory in the SM6 200m individual medley gave the 17-year-old, who has dwarfism, her fourth Paralympic title.

Natasha Baker had won Britain's first gold of the day with victory in the Grade II freestyle dressage.

Wheelchair racer Mickey Bushell then won GB's 19th gold of the Games in the T53 100m at the Olympic Stadium.

I've met him at his house, in number 10. It's great to meet him in my place, at the pool

But Lee Pearson, hoping to equal the British modern-era Games record of Tanni Grey-Thompson and Dave Roberts with an 11th Paralympics title, had to settle for dressage bronze in the Grade 1b individual freestyle event.

Simmonds swam a sensational final leg to come from behind and delight the home crowd at the Aquatics Centre ahead of Germany's Verena Schott, with GB's Natalie Waddon in third.

The victory, in a world record time, came after she successfully defended her 400m freestyle title on Saturday and follows two victories at the 2008 Paralympics in Beijing when she was 13.

"I'm so pleased. I'm really chuffed and enjoying every minute. It's amazing in front of this home crowd," said Simmonds, who was presented with her latest gold medal by Prime Minister David Cameron.

"I've met him at his house, in number 10. It's great to meet him in my place, really, at the pool. It was just congratulations. I don't really remember much, but being on the podium was just an amazing atmosphere and an amazing experience to be on it second time running."

GB celebrated their first gold of the day when Baker, who is making her Paralympic debut, followed up Saturday's Grade II individual triumph with a Paralympic freestyle record score of 82.800%.

"It has been an amazing experience to be here and Rio [in 2016] won't be the same without this crowd. They have been the best."

Bushell, the Shropshire wheelchair racer who won silver in Beijing in 2008, made a brilliant start and powered away to win Great Britain's fifth gold of the athletics competition, and 19th overall, three clear of Russia and Australia in the medals table.

"Training has been going really well the past couple of weeks so I knew I was contender for the gold," said the 21-year-old. "The conditions on the day were perfect."

Elsewhere, sprinter Oscar Pistorius apologised for the timing of his controversial comments following his loss in the T44 200m final on Sunday.

In a statement, Pistorius said: "I want to apologise for the timing of my comments but I do believe there is an issue here."

Meanwhile, Ukrainian discus thrower Maria Pomazan, stripped of her title after a scoring blunder, has been told she must return the gold medal she was awarded.

Pomazan won gold in the F35/36 discus, only for organisers to promote China's Wu Qing from silver. Pomazan, demoted to second place, failed to turn up to the rearranged ceremony at the Olympic Stadium on Monday.

About 10,000 extra tickets are being bought for the Games every day as soon as they go on sale, as Paralympic venues experience unprecedented numbers of visitors.

"We are part of an incredible Games so far in terms of the number of world records, Paralympic records, regional records.

"Critically for the British athletes, there's a whole raft of personal bests. We are very much talking about the number of silvers being won, not golds being lost."