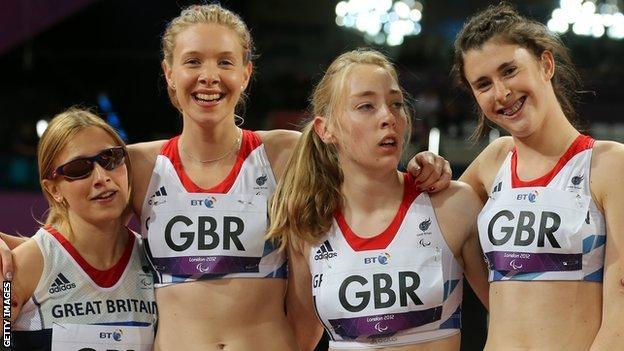 Wales' Jenny McLoughlin and Olivia Breen have won bronze in the in T35-38 4x100m relay final for ParalympicsGB.

Plymouth-based Breen, 16, whose family come from Cardiff and Chepstow's McLoughlin, 20, joined Bethany Woodward and Katrina Hart in finishing third behind Russia and China.

Earlier Steve Morris failed in his bid for Paralympic Games gold at London 2012 in the T20 1500m on day six.

Morris, 23, from Cardiff, making his Paralympics debut, had the fastest time this season of the 11 finalists.

Tracey Hinton returned to the track in the T11 100m, having failed to make the 200m final on Sunday in her sixth Paralympic Games appearance, but had no better fortune and also missed the 100m final despite finishing third in her heat.

The women's wheelchair basketball reached the quarter-final stage, where Wales' Clare Strange will were on the losing GB side to Germany, who progressed in a 55-44 triumph.

But they came close to winning the race, ran out of their changeover area on the last exchange, which cost them the chance of rivalling Russia for gold.

Governing body Sport Wales had set a target of winning at least 14 medals.