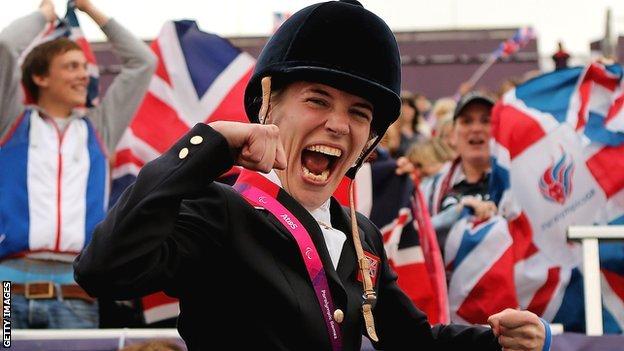 A sport-by-sport round-up of how ParalympicsGB athletes perform on Day Six of the 2012 Paralympic Games in London.

Daniel West throws a personal best of 11.37m in the F34 shot put final, but finishes seventh in the overall standings. Jonathan Adams finishes 14th with his best throw measured at 9.84m.

Sally Brown is through to the final of the women's 100m T46, qualifying in sixth place in a time of 13.67 seconds.

Tracy Hinton (with her guide Steffan Hughes) fails to make the final of the women's 100m T11, finishing seventh with a season best time of 13.43 seconds.

Beverley Jones finishes seventh in the final of the women's shot put F37 with a distance of 9.85m.

Peter and Stephen Maguire miss out on the bronze medal in the men's BC4 pairs, losing 8-2 against Canadian pair Marco Dispaltro and Josh vander Vies.

GOLD MEDAL - Sophie Christiansen grabs gold in the grade Ia individual freestyle test on her horse Janeiro 6 with a score of 84.750 and becomes the first Briton to win three golds at a single Paralympic Games.

ParalympicsGB lose their final Pool A match 1-0 to Iran, meaning the home side's medal hopes are over.

ParalympicsGB women had already qualified for the quarter-finals and continue their fine form with a 5-0 group C victory over Denmark.

Helena Lucas finishes first in race seven and fourth in race eight in the single-person keelboat (2.4mR) division, leaving her first in the overall standings.

Alexandra Rickham and Niki Birrell finish fourth in race seven and second in race eight of the two-person keelboat (SKUD18) division leaving them third in the overall rankings.

Susannah Rodgers finishes less than a second outside of the medals in the final of the women's 50m freestyle S7, coming fourth with a time of 34.08 seconds.

BRONZE MEDAL - Matt Walker picks up his twelfth Paralympic medal by winning bronze in the men's 50m freestyle S7, with a time of 28.47. JonFox and Josef Craig finish sixth (28.87) and seventh (29.39) respectively.

Hannah Russell comes sixth in the final of the women's 100m freestyle S12 with a time of 1:02.38. Russell won silver and bronze medals in her first two events at London 2012.

James Clegg finishes eighth in the final of the men's 100m freestyle S12 in a time of 55.94 seconds.

BRONZE MEDAL - Ellie Simmonds grabs a bronze after a fantastic burst of speed in the last few metres of her women's 50m freestyle final, finishing with a time of 36.11 seconds. Earlier, team mate Natalie Jones had missed out on a place in the final.

Justine Moore fails to qualify for the women's class B foil quarter-finals losing 5-2 to Jingjing Zhou and 5-4 against Iryna Lukianenko.

Dave Phillipson is beaten 6-0 6-2 by Japanese opponent Shingo Kunieda in his men's singles round of 16 clash.

Peter Norfolk is beaten 3-6 7-5 6-0 by Israel's Shraga Weinberg in the quad singles quarter-final.