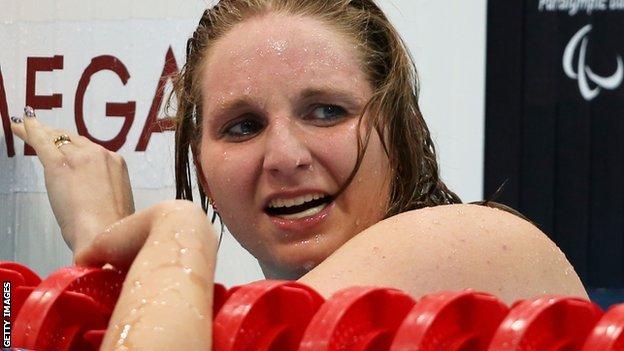 The 26-year-old from Billinge was pushed hard by Jessica Long of the United States until she moved away from her rival over the final 50m.

"That was unbelievable and I couldn't be more happy," said Frederiksen.

Veteran British swimmer Matt Walker also won his 12th Paralympics medal when he hung on to take bronze in the S7 50m freestyle.

Frederiksen, who has limited use of her right arm and leg following an accident in 2004, said she had been nervous before the race, while a recent illness had hampered her build-up to the Games.

"I was determined I was going to fight," said the Briton, who added gold to the 400m freestyle silver she won on Friday. "The lack of training because of illness meant I had to be strong and hang on."

The 17-year-old Simmonds, who has already won two golds, produced a powerful finish to snatch bronze in the S6 50m freestyle.

"It was so unexpected," she told BBC Radio 5 live. "There were three swimmers much faster than me. I've got a few days to rest before I defend my 100m free title. I don't want this to end."

Meanwhile, Hynd pipped his team-mate Thomas Young to third in the opening race of the night, the S8 100m backstroke.

Nottinghamshire's Hynd, who has muscular dystrophy, said: "I'm happy with that, but I would have liked the time to be quicker."