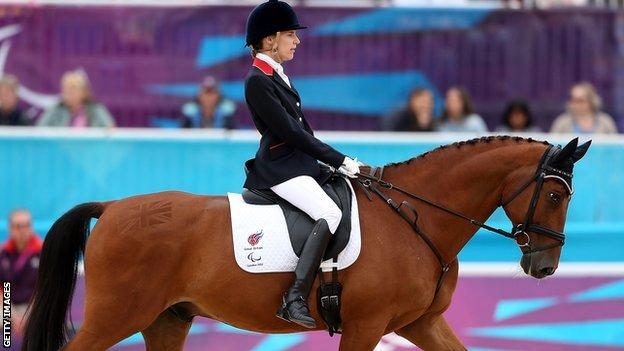 The 24-year-old, riding Janeiro 6, posted a huge score of 84.750% to take victory in the freestyle dressage Grade 1a test ahead of Laurentia Tan of Singapore and Ireland's Helen Kearney.

The trio took GB's equestrian haul to 11 medals, beating the record of 10 set in Beijing in 2008.

The 24-year-old's victory meant the host nation won a medal in every event in the equestrian competition, which has now finished.

Earlier, Wells, 22, won her second silver of the Games in the Grade IV freestyle class on board Pinocchio.

Wells, who also won team gold, managed a personal best score of 81.150% but saw Belgium's Michele George on Rainman pass her with 82.100% for gold in a repeat of the individual championship on Sunday.

Frank Hosmar of the Netherlands took bronze with 78.600%.

"You can't complain when you do the best you've ever done before," Wells told BBC Radio 5 live. "Unfortunately, it wasn't quite good enough for gold but it's the best that I could do.

"We had a small mistake that cost us but to come away from my first Games with a gold and two silvers is pretty phenomenal.

"I think the standard of the sport is going higher and higher, it's amazing. A silver is not bad and I'll definitely learn a lot from this competition."

Criddle, 46, riding LJT Akilles in Grade III, won her second silver in as many days to add to her team gold.

As in the individual championship, Germany's Hannelore Brenner dominated, winning gold on Women of the World with a score of 81.700%. Taunton-based Criddle posted a score of 78.550%.