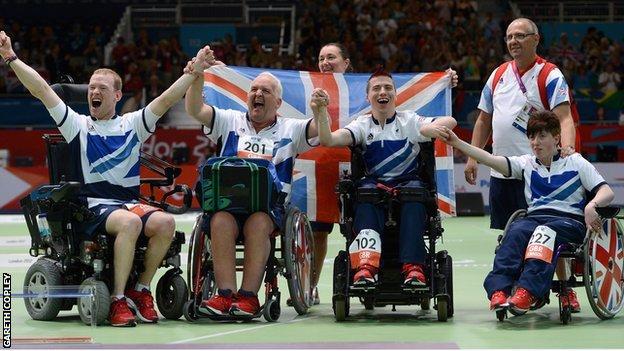 The Great Britain BC1/2 boccia team clinched Paralympic bronze with a narrow 7-5 win over Portugal.

David Smith, Dan Bentley, Nigel Murray and Zoe Robinson were defending champions but lost 18-1 to a strong Thailand team in the semi-finals.

However, they regrouped to ensure they came away from their home Games with a medal.

GB brothers Stephen and Peter McGuire lost 8-2 to Canada in the BC4 pairs bronze play-off.

Britain trailed 1-0 to Portugal after the first of the six ends but put in some solid play after that to lead 6-1 with two ends to go.

However, the Portuguese fought back to take the penultimate end 4-0 and cut the gap to one point.

But GB, watched on by British Paralympic Association patron Prince Edward, held their nerve to win the final end and secure the medal.

"We felt confident we could beat Portugal but we always knew they would come back at us at some point in the match," Smith told BBC Sport afterwards.

"We are delighted with a bronze. We knew Thailand would be tough, even at our best, because of the power they have. We had a good meeting last night and put that result to bed because dwelling on it wouldn't help.

"The standard has definitely gone up and all of our games were tough, which is a good thing, but winning a medal at a home Games was so important to us and we wanted to give the crowd something to cheer about."