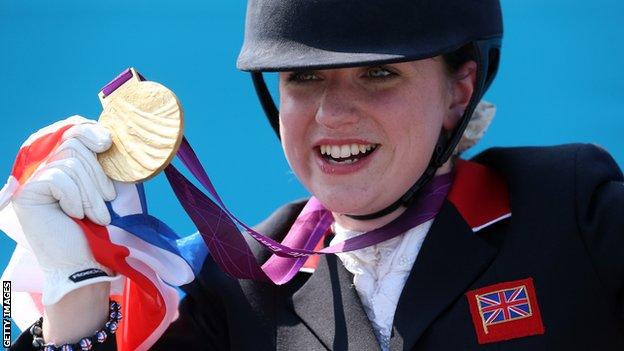 She told BBC London 94.9: "I've already bought my horse for Rio. I got him last year and he is a six-year-old called Bam Bam.

"He has so much talent and I'm really looking forward to bringing him out."

She added: "I've had Cabral for three years and we had three years of international competition together.

"He's been an absolute superstar. It will be a lot of hard work with Bam Bam but I'm really looking forward to it.

"I think we've got a great partnership already even after one year so I'm hoping for good things in the future.

"Maybe in another four years I can win another two or three medals and have two more Paralympic records."

Baker, who took up horse riding at the age of nine, admits that her success in London was slightly overwhelming.

"I got into the Riding for the Disabled Association and was talent-spotted at 11 and went to my first international competition when I was 15," she continued.

"It's kind of gone from that to two gold medals.

"I can't quite believe my journey but it's been a very good one."