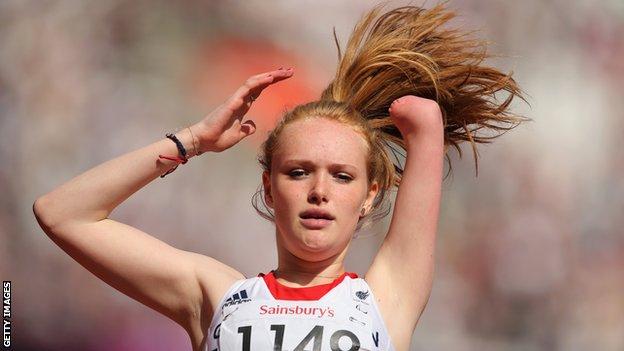 Sally Brown regrouped from her 200m disappointment to qualify for the final of the T46 100m at the Paralympics.

The Northern Irish athlete, 17, clocked 13.67 seconds in her heat which left her the seventh fastest qualifier for Wednesday night's final.

"I'm over the moon with that," said British team member Brown.

"I didn't get into the 200m final and I was really gutted about that. There will be a lot of fast girls in the final and I'm delighted to get there."

Single arm amputee Brown was in the same heat as fastest qualifier Yundis Castillo of Cuba, who set a new world record of 11.95 to follow up her world-record breaking victory in the 200m event on Saturday.

Brown, who is form Ballykelly in county Londonderry, has been troubled by injury this season after winning a surprise World Championship 200m bronze in January 2011.

Her father Richard said that she had been "devastated" to miss out on Saturday's 200m final in the Olympic Stadium.

"She wasn't well the night before but thankfully that all seems to have passed now," added Mr Brown.

"The final is going to be very tough for her because they are some very fast girls and she will be very pleased if she can run a personal best."