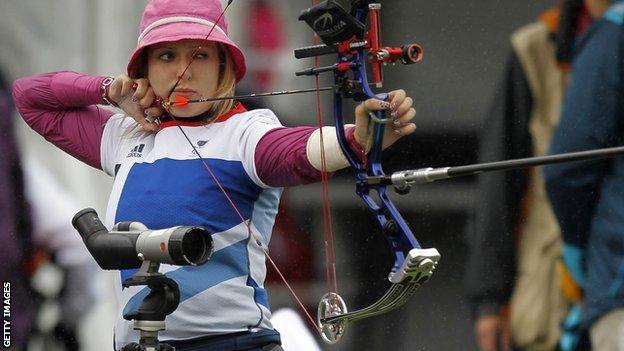 Brown won a thrilling match 6-4 but Clarke had a chance to win with her final arrow needing a 10.

However she could only manage a seven, allowing World and European champion Brown to claim victory.

Brown, 24, the tournament favourite, said: "To win in front of a home crowd is so much better than Beijing."

"It is incredible and it hasn't really sunk in yet," she added.

Brown had reached the final after a comprehensive 6-2 win over Russian Marina Lyzhnikova while Clarke, who celebrated her 30th birthday on Sunday, put in a superb display to beat another Russian Stepanida Artikhinova, who won the test event in the same venue in May when she defeated Brown.

The British pair shared the first two sets but Brown pulled 4-2 ahead after winning the third set before Clarke hit back to take the fourth.

Brown shot three nines in the decider and after Clarke shot a 10 and an eight, she knew that a 10 would win or a nine would set up a shoot-off but the seven left her with silver, although she was still happy with her achievements.

"To get into the final was brilliant and to shoot against another Briton was incredible. I shot really well and am very proud," said Clarke.

"A silver is fantastic and to go one better than I did in Beijing is brilliant. If you are going to meet your team-mate, do it in the final so you are both guaranteed a medal."

Brown has a neurological problem called Complex Regional Pain Syndrome which gives her chronic pain in her feet, but the adrenalin from competing helps to ease the pain.

As well as her achievements in disabled competition, she also won gold for England in the compound team event in the 2010 Commonwealth Games, but she admitted that the pressure had affected her at London 2012.

"I tried to tell myself all the way through that this was just another tournament and I can shoot well under pressure, but when I actually got here it was crazy," she told BBC Sport.

"I couldn't have anticipated the atmosphere in my first match and I didn't put in the best of performances, but I got that out of the way and today was much better, although I was still shaking a bit."