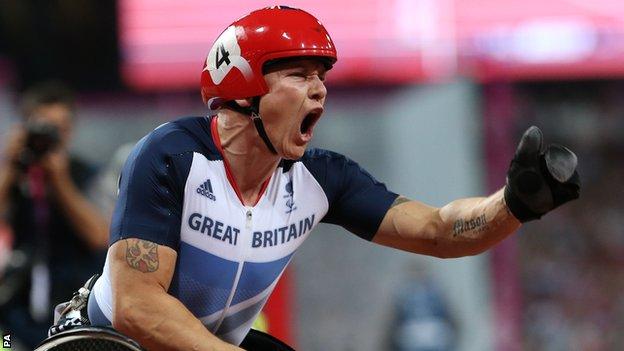 British wheelchair racer David Weir claimed his second gold medal of the Paralympics with a superb victory in the T54 1500m.

The 33-year-old's win was GB's 23rd gold of the Games and ensured they remained second in the medals table ahead of Russia.

Earlier, Sophie Christiansen won her third gold in London to take Britain to their best ever Paralympic equestrian medal haul of 11.

Weir channelled all the support from his hometown crowd in the Olympic Stadium to sprint to victory in the final lap ahead of silver medal-winning Prawat Wahoram of Thailand and Gyu Dae Kim of South Korea, who took bronze.

The Londoner, who now has four Paralympic titles to his name, and eight medals in all, will also hope to defend his 800m crown on Thursday before turning his attention to the T54 marathon on Sunday.

The equestrian continued to be a source of success as Sophie Wells won her second silver of the Games in the Grade IV freestyle dressage. The Lincoln-born rider led with 81.150% but was overtaken by Belgium's Michele George.

Their performances were overshadowed by Ascot's Christiansen as she finished nearly 6% ahead of second placed Laurentia Tan of Singapore with a huge 84.750% winning score.

Walsall-born Ellie Simmonds added to the two gold medals she had already earned in the Aquatics Centre with a bronze in the S6 50m freestyle final. The 17-year-old only qualified fourth in the morning heats and had said she did not expect to end up on the podium again.

Billinge's Heather Frederiksen completed a successful defence of her S8 100m backstroke title by taking a clear victory ahead of the United States's Jessica Long and Russia's Olesya Vladykina.

Swansea-based Stephanie Millward swam the second fastest time in the S9 400m freestyle heats and equalled that performance to take silver in the final.

Stockport's Matthew Walker won his 12th medal in four Paralympics as he took bronze in the men's 50m freestyle S7.

Chertsey's Hannah Russell set the leading time in qualifying but finished a distant sixth in the final of the women's 100m freestyle as Russia's Oxana Savchenko won gold in a world record beating time of 58.41 seconds.

David Devine got Great Britain's night in the athletics off to a medal winning start with a bronze in the T13 men's 1500m final.

The Liverpool-born runner put in a fantastic performance to finish behind Zhiou Abderrahim of Tunisia, who won with a world record three minutes 48.31 seconds, and Kenya's David Korir who attained the silver.

His achievement was bettered by Dorchester's Paul Blake in the men's 400m T36 final as he held on in the final straight to take silver behind Russia's Evgenii Shvetcov, who broke the world record with a time of 53.31 seconds.

Britain's 4x100m women's T35/T38 team took bronze but were forced to endure an agonising wait for the result to be ratified as the officials pondered whether the final handover between Katrina Hart and Jenny McLoughlin occurred inside the changeover zone.

Britain's BC1/2 boccia players, who came into the Games as defending champions, got over the disappointment of their semi-final mauling against Thailand by securing bronze in a tight 7-5 victory against Portugal.

Britain collected a surprise bronze medal in the R6 50m rifle prone SH1 at the Royal Artillery Barracks through Matt Skelhon. The Peterborough-born shooter scraped into the eight-strong final in seventh place in a discipline he only took up 18 months ago.

The International Paralympic Committee (IPC) has confirmed Oscar Pistorius will not be reprimanded over remarks he made about the governing body after finishing second behind Alan Oliveira in the T44 200m final on Sunday.

The 25-year-old South African was unhappy at the length of the Brazilian's blades.