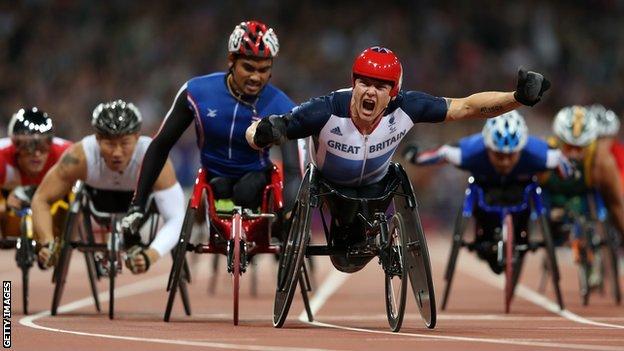 The Briton, who won gold over 5,000m on Sunday, edged out Prawat Wahoram in a record time of three minutes 12.09 seconds to claim the fourth Paralympic gold medal of his career.

"I thought I had gone too early but all of the endurance work I've done in recent weeks saw me through."

Weir, who took control of the race on the final lap to win by under two tenths of a second, said his aim had been to win the 5,000m to give him "breathing space" ahead of the 1500m.

"It's worked because I felt relaxed today," he said. "I knew from the warm-up I was hitting top speed and that I had more in me."

The wheelchair racer is also attempting to win gold in the 800m and marathon before the Games end on Sunday.

There were also medals for Britain's Paul Blake, whotook silver in the T36 400m final, and David Devine, who won bronze in the T13 1500m.

World champion Blake, who has cerebral palsy, was denied gold on his Paralympic debut by Russia's Evgenii Shvetcov, whose time of 53.31 secs was a new world record.

"It was a superb use of the lanes by David Weir. He edged between lanes one and two, pushing the other guys out to make sure they had to push significantly further in the final sprint but not letting anyone push up on the inside. They were lining up for the relay race and putting the markers out and David was still going on a second lap of honour, soaking up the atmosphere from the crowd. There was a little smile from him, which is not always there when he wins."

Blake, who finished in 54.22 secs, told BBC Radio 5 live: "I couldn't have asked for more really. It's my first Paralympic Games and the support was amazing. I'm really happy.

"I was nervous coming out as I'm not used to crowds of that size, but I soaked it all up and they were like an extra pair of legs out there."

Visually impaired Devine only began competing in junior championships three years ago and won a bronze medal in the 800m at the World Championships last year.

It was a fantastic performance by the 20-year-old to finish behind Zhiou Abderrahim of Tunisia, who won with a world record time of three minutes 48.31 seconds, and Kenya's David Korir, who took silver.

The GB T35/T38 women's 4x100m relay team of Olivia Breen, Bethany Woodward, Katrina Hart and Jenny McLoughlin won bronze but almost ran out of their changeover area on the last exchange, which cost them the chance of rivalling Russia for gold.

Britain's Steve Morris was the quickest qualifier and pre-race favourite for the T20 1500m final for those with learning disabilities.