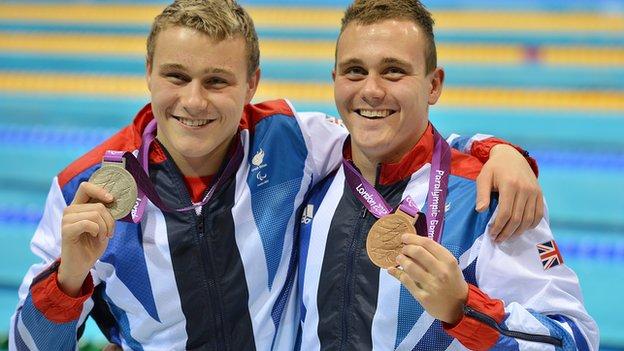 A sport-by-sport round-up of how ParalympicsGB athletes perform on Day Seven of the 2012 Paralympic Games in London.

The men's ParalympicsGB archers win their team recurve open quarter-final 195-179 against Chinese Taipei but then lose 197-190 at the semi-final stage to South Korea.

BRONZE MEDAL - David Devine wins bronze by finishing behind Tunisia's Zhiou and Russia's Sharov in the men's 800m T12 with a time of 1.58.72.

Jonnie Peacock qualifies from his round one heat of the men's 100m T44 by finishing first with a personal best of 11.08.

Sophie Kamlish qualifies from her heat of the women's 200m T44 by finishing third with a personal best of 29.62 seconds. Long jump silver-medalist Stef Reid finishes fourth in her heat with a time of 28.97 seconds, taking her place in tomorrow's final as one of the fastest losers.

Daniel Bentley loses his last-32 clash 4-1 against Cristina Goncalves in the mixed individual BC2 division. Team-mate Zoe Robinson also loses her match at the same stage.

Scott McCowan wins his last-32 mixed individual BC3 clash against Jose Rodriguez Vazquez 11-0. Team-mate Jacob Thomas is also through to the last-16 after winning 8-1 against Veronica Pamies Morera.

BRONZE MEDAL - David Stone, a double gold-medalist in Beijing, grabs bronze in the mixed T1-2 time trial with a time of 14:25.66.

SILVER MEDAL - Karen Darke, who missed the Beijing Games due to a sea-kayaking incident,takes silver in the individual H1-2 time trial with a time of 33:16.09.

Rachel Morris finishes fifth in her individual H3 time trial with a time of 36:38.97.

Lora Thurnham and her pilot Fiona Duncan finish seventh in the women's individual B time trial with a time of 36:29.27.

GOLD MEDAL - Sarah Storey wins her third gold of London 2012, finishing almost two minutes ahead of her nearest opponent in the women's individual C5 time trial with a time of 22:40.66. Crystal Lane finishes ninth in a time of 27:33.44.

SILVER MEDAL - Mark Colbourne, who won ParalympicsGB's first medal of the games, takes silver in the men's individual C1 time trial with a time of 25:29.37. It is Colbourne's third medal of London 2012.

ParalympicsGB smash the USA side 4-0 in their men's preliminary match, with Richmond, Fletcher, Diallo and Paterson grabbing the goals.

Helena Lucas finishes eighth in race nine and fifth in race 10 of the single-person keelboat (2.4mR) division to assure at least a silver medal in tomorrow's final race.

John Robertson, Hannah Stodel and Stephen Thomas finish fourth in race eight and nine and second in race 10 of the three-person keelboat (sonar) category. The trio are in third place in the overall rankings going into tomorrow's eleventh and final race.

Alexandra Rickham and Niki Birrell finish third in race nine and fifth in race 10 of the two-person keelboat (SKUD18) division. They are third in the overall rankings going into the final day's sailing tomorrow and are guaranteed at least a bronze medal.

SILVER MEDAL - Louise Watkin wins silver and equals the British record in the final of the women's 50m freestyle in a time of 29.21 seconds.

SILVER & BRONZE MEDALS - Charlotte Henshaw wins silver in the women's 100m breaststroke SB6 with a time of 139.16 and compatriot Elizabeth Johnson takes bronze with a time of 140.19.

BRONZE MEDAL - Hannah Russell wins bronze in the women's 100m backstroke S12 with a time of 1:10.15 finishing behind Russia's Savchenko and Azerbaijan's Pronina.

BRONZE MEDAL - Rob Welbourn, who won silver in the men's 400m freestyle S10 in the last two Games,grabs bronze in this year's final with a time of 4:08.18.

GOLD MEDAL - Oliver Hynd wins the men's 200m individual medley SM8 in a European record time of 2:24.63. His brother Sam Hynd finishes less than a second out of the medals in fourth, with a time of 2:28.03. Team-mate Thomas Young earlier failed to make the final after finishing fourth in his heat.

Elizabeth Johnson sets a Paralympic record of 1:41.09 to qualify from her heat of the women's 100m breaststroke SB6, only to see her record broken in the next heat by

Matthew Whorwood finishes last in his heat of the men's 100m breaststroke SB6 with a time of 1:36.09 and will not compete in tonight's final.

Hannah Russell wins bronze in the women's 100m backstroke S12 with a time of 1:10.15 finishing behind Russia's Savchenko and Azerbaijan's Pronina .

Gemma Almond, competing at her first Paralympics, comes last in her women's 400m freestyle S10 heat with a time of 5:07.77 and does not make the final.

Emma Hollis, who has been struggling with a broken ankle, comes sixth in her women's 200m individual medley SM8 heat with a time of 3:28.90 and does not make tonight's final.

ParalympicsGB reach the men's semi-finals with a thoroughly entertaining 75-70 victory over Turkey.

Justine Moore wins just once (5-2 against Alesia Makrytskaya of Belarus) in her five morning preliminary matches in the women's individual epee category B, meaning she does not make the quarter-finals.