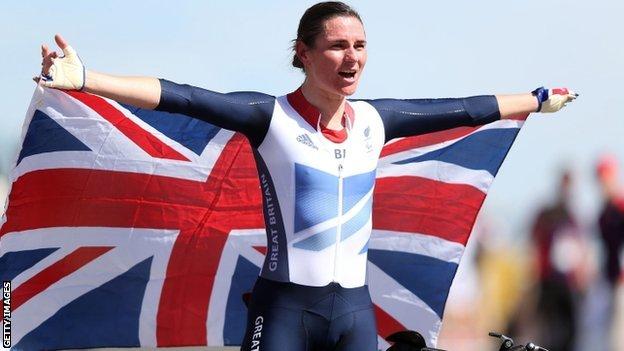 Defending the title she won in Beijing, the 34-year-old finished one minute 34 seconds clear of the rest of the field.

I love riding on the road and when the time trial's done, well there's no greater feeling

Elsewhere, Welshman Mark Colbourne won his third medal of the Games with silver in the C1 time trial.

The 42-year-old finished 12.94 seconds behind Germany's Michael Teuber, the same man who beat him in the 2011 world championships.

"I'm proud of what I've done; I'm catching Teuber month by month," he said. "I tried to pace it as best I could. I was probably 30 seconds quicker on the first lap than I wanted

After emphatic victories in the C5 pursuit and the 500m time trial in the velodrome, there was still nobody able to seriously challenge Storey as London 2012's cycling action moved outdoors for the first time.

The Manchester rider, who was born without a functioning left hand, narrowly missed out on a place in the gold-winning Olympic team pursuit team, but is now on course for a Paralympic clean sweep.

"I've spent so much time on the road this year and only went on to the track three weeks ago," she said.

"Having watched the success of the Olympic team on the road, Bradley [Wiggins] winning the time trial and Chris Froome getting the bronze medal, I just wanted to make sure I added my name to that list of success.

"With the track I've done so much [but] I love riding on the road and when the time trial's done, well there's no greater feeling."

Storey had a lead of 51.32 seconds over second-placed Anna Harkowska of Poland at the halfway point of the 16km course and gave the home fans lining the former Formula 1 track nothing to worry about as she remorselessly pressed home her advantage.

It was the 10th title of a Paralympic career that began as a 14-year-old swimmer in Barcelona in 1992. She switched sports in 2005 after an ear infection prevented her training in the pool.

The 41-year-old, who won bronze at the world championships in 2011, added Paralympic silver to her collection as she led the chase behind eventual winner Marianna Davis in the H1-2 time trial.

Neither David Stone nor Rachel Morris could defend the titles they won in Beijing, however, with Stone having to settle for bronze in the Mixed T1-2 time trial and Morris, who dislocated her shoulder in a collision with a car just two months ago, fifth in the H3 race.

Storey speaks to 5 live after winning her third gold

But, riding with pilot Fiona Duncan in the individual B time trial, her tandem suffered a gear problem that saw a seven-second lead over the rest of the field after two laps dissolve into a seventh-placed finish after the third and final circuit.

While Iraq veteran Jon-Allan Butterworth, who won three silvers on the track, was soon out of contention in the C5 time trial.