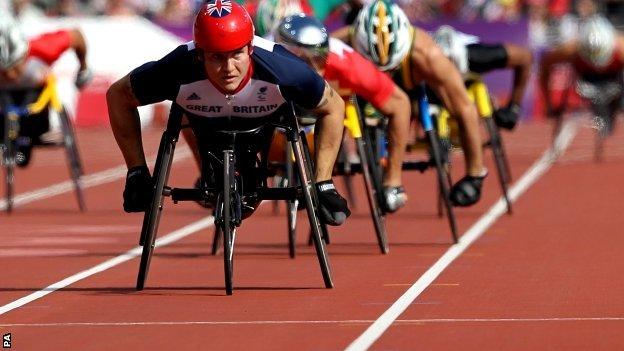 Britain's David Weir showed no ill effects from another sleep-deprived night as he qualified with ease for Thursday's T54 800m final.

Weir won his second gold of London 2012 late on Tuesday evening in the 1500m, and was back on the track hours later.

His time of one minute 37.09 secs made him the quickest 800m qualifier.

"I just wanted to progress - if that meant second or first I didn't mind, but I definitely didn't want to be the fastest loser," said Weir.

"It [confidence] is high but I don't want to get too complacent either."

He added: "I'm not as tired as the other morning [after his 5,000m victory] but I haven't eaten properly and I haven't replenished what I have lost, so I need to get some rest, eat what I need and recover now."

Weir, 33, also pointed out that in addition to world champion Marcel Hug of Switzerland, who he beat in the heats, there are other threats to his hopes of a third London Paralympic gold.

"It [the medal] is potentially there but there are some guys in there like Lixin Zhang, who was very quick, so it's going to be tough.

"It's the hardest category in the world and most of my opponents are younger than me and getting quicker all of the time, so I've had to really up my training over the last 10 weeks."

There was a surprise in the women's T37 200m heats as Great Britain's world champion Katrina Hart failed to progress.

The runner, who has cerebral palsy, won bronze as part of the 4x100m relay team on Tuesday night but struggled in the 100m final, finishing sixth earlier in the week.

Sophie Kamlish, the 16-year-old single-leg amputee who runs with one blade, reached the T44 200m final behind a world record of 26.97 from Dutch athlete Marlou van Rhijn.

GB's Stef Reid, who won Paralympic bronze in the event for Canada four years ago, is also through after securing one of the two fastest-loser positions.