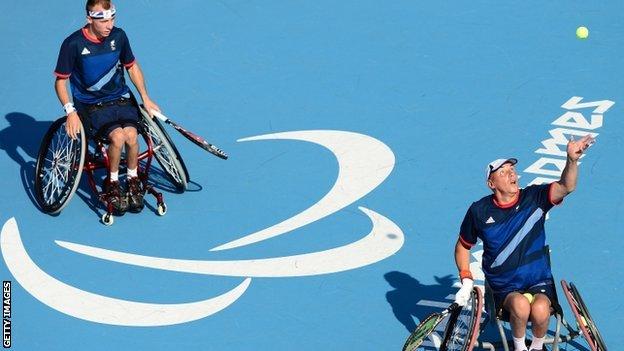 Britain's Peter Norfolk and Andy Lapthorne had to be content with Paralympic silver after losing their quad doubles final at Eton Manor.

The GB pair were keen to make amends after both losing early in their singles campaigns.

But despite coming from a set and 3-1 down in the second to force a decider, they found the Americans too strong.

The British pair, who won the Australian Open title earlier this year, made a nervous start to the match at the only venue on the Olympic Park built specially for the Paralympics.

Norfolk lost his opening service game and the Americans, champions in both Athens and Beijing, broke for a second time to go 5-2 ahead and quickly wrapped up the set.

Norfolk was again broken at the start of the second set as the Americans raced into a 3-1 lead but the British pair started to battle their way back into the match.

They went 5-4 and then 6-5 ahead and engineered two break points in the 12th game which Norfolk converted with aplomb to give the Britons hope of a second win in two meetings between the pairs this year.

GB were looking for a positive start in the decider but Norfolk was broken once again in the fifth game to give the USA a 3-2 lead.

Some unforced errors started to creep into the GB game and it wasn't long before the USA were celebrating their third consecutive gold medal.

"We didn't really deliver and from a tennis perspective we could have done more but it is all about on the day and we didn't do it," Norfolk told BBC Sport afterwards.

"The Americans played a very solid game and you can't take that away from them. We thought the third set was ours for the taking, but sometimes you can't turn it around."

Lapthorne, who was making his Paralympic debut, was bitterly disappointed with the defeat.

"Hopefully I will have more Games after this but I tried so hard for Peter and I am absolutely gutted," he said. "We are the best team in the world but it just wasn't meant to be today."

Norfolk, 51, has also refused to rule out competing in Rio in four years time.

"I still think I am the best player in the world and we will see about it," he added. "I haven't stopped playing for 12 years and I will definitely be taking a break. I have a young family and I want to spend time with them."