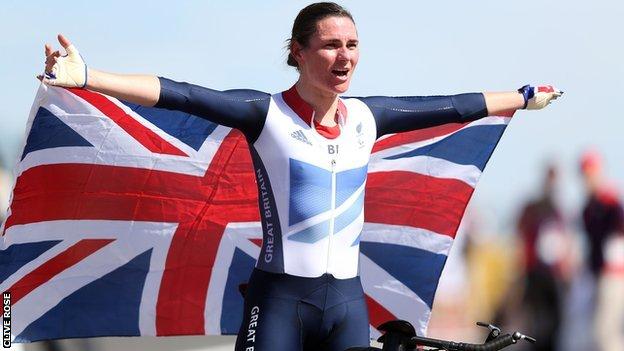 Britain's Sarah Storey won her third gold medal of the 2012 Paralympics by defending her title in the C5 time trial at Brands Hatch.

Storey, 34, can equal the GB record of 11 Paralympic titles, held by Baroness Tanni Grey-Thompson and Dave Roberts, if she wins Thursday's road race.

Oscar Pistorius claimed his first gold of the Games in the 4x100m.

Elsewhere, ex-Formula One driver Alex Zanardi provided one of the stories of the Games in landing hand cycling gold.

He beat second-placed Nobert Mosandl of Germany by 27 seconds to take the top medal in the H4 time trial.

Zanardi lost his legs in an accident while racing in a Cart event in 2001 but returned to car racing just nine months later, eventually retiring in 2009 after discovering hand bikes.

GB cyclist Storey began her Paralympic career at the 1992 Games as a 14-year-old swimmer.

The Manchester-based rider narrowly missed out on a place in the gold-winning 2012 Olympic team pursuit line-up, but is now on course for a Paralympic clean sweep, having already claimed victory in the C5 pursuit and 500m time trial in the velodrome.

She gave a dominant display on the road at Brands Hatch, saying: "Having watched the success of the Olympic team on the road, Bradley [Wiggins] winning the time trial and Chris Froome getting the bronze medal, I just wanted to make sure I added my name to that list of success."

The evening session in the Aquatics Centre began well for GB as 17-year-old Ollie Hynd from Nottingham won gold in the SM8 men's 200m individual medley.

Hynd, who has also won silver and bronze at these Games, clocked a European record time of two minutes 24.63 seconds, while his older brother Sam finished fourth in the same race.

Welsh cyclist Mark Colbourne also won his third medal of the Games with silver in the C1 time trial.

He said: "I gave it everything, I'm happy with my silver."

However, Peter Norfolk and Andy Lapthornelost out in their bid for wheelchair tennis quad doubles gold as American duo David Wagner and Nick Taylor beat them 6-2 5-7 6-2 at Eton Manor.

The American pair won the opening set comfortably and, although Norfolk and Lapthorne rallied to claim the second set, the defending champions proved too strong in the decider.

It meant Norfolk, known as "the Quadfather", had to settle for a silver medal as compensation for his failure to defend his quad singles title.

There was disappointment for GB's wheelchair rugby team, who lost their opening Group A match 56-44 to USA.

The home side led led 13-11 after the first quarter, but were unable to cope with the impressive movement of the reigning Paralympic champions, who took the lead early in the second quarter before gradually pulling away to victory.

GB are quickly back into action with their second match against France on Thursday at 19:00 BST.

South Africa's Pistorius returned to the Olympic Stadium for the T44 100m heats but was outshone by GB world record holder Jonnie Peacock.

The South African defending champion won his heat in a time of 11.30 seconds, but this was bettered by Peacock, who qualified fastest in 11.08.

World champion Jerome Singleton finished behind Peacock and his time of 11.46 was the slowest of the automatic qualifiers.

Brazilian Alan Oliveira, who won the 200m final on Sunday, qualified as one of the two fastest losers for Thursday night's T44 100m event and he, Singleton and Pistorius returned for the 4x100m relay final on Wednesday evening.

That event finally provided the moment for Pistorius, a Paralympics superstar, to shine. He helped South Africa to a new world record time of 41.78 seconds and held off a challenge from his 200m conqueror Oliveira in the final leg.

Pistorius became the centre of attention when he criticised the International Paralympic Committee for their regulations on prosthetic legs after his shock loss in the T44 200m, before later apologising.