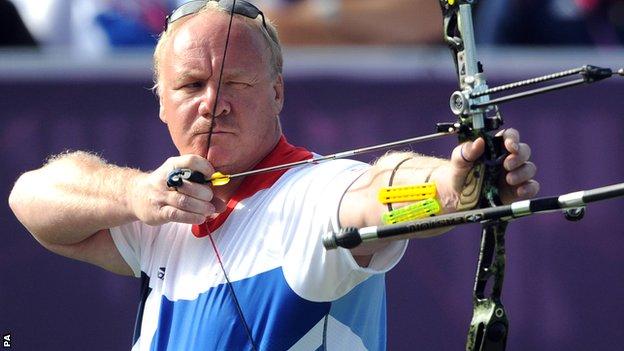 Norfolk archer Kenny Allen has set his sights on Rio 2016 after the "massive learning curve" of competing at his first Paralympics.

He missed out on a medal when Great Britain lost 206-193 to China on Wednesday with the team recurve bronze at stake.

"Obviously I'm gutted but I thought the boys and myself shot pretty well in tricky, blustery conditions," the 42-year-old told BBC Sport.

Allen only took up archery five years ago but produced a Paralympic record score of 651 points in qualifying for the individual recurve - standing competition.

If there's one ethic we always work with, it's that we train as a team, shoot as a team, we win and lose as a team

It therefore came as a disappointment when he was beaten by Turkey's Zafer Korkmaz at the last-16 stage.

He still had the team event to follow but after defeating Chinese Taipei 195-179, GB lost narrowly 197-190 to Korea in the semi-finals and were then beaten by China in their last chance to claim a medal.

"It's a massive learning curve, it's my first Paralympics, it's Phil's [Bottomley] first, but we can take away the experience and learn from it.

"China are no slouches when it comes to recurve archery, they've been on top of their game for a long time," said Allen.

"If there's one ethic we always work with, it's that we train as a team, shoot as a team, we win and lose as a team.

"We're not going to be pointing fingers, we don't do that, we just go back to the drawing board and work a bit harder."

Allen described the crowd support at the Royal Artillery Barracks as "phenomenal" and added: "To go home with a Paralympic record of my own is fantastic."