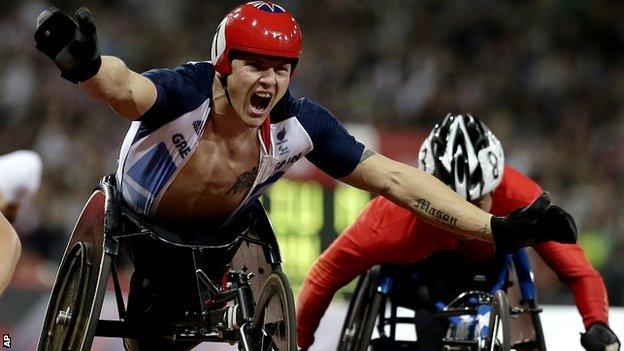 David Weir and Hannah Cockroft made it a golden night for British athletics at the London Paralympics.

Weir, 33, clinched the third gold of a possible four by winning the T54 800m, holding off China's Zhang Lixin and Swiss Marcel Hug.

He will hope to complete a quartet of wins in Sunday's marathon.

Weir faced his toughest test of London 2012 so far in the final of the 800m. After a tactical first lap, China's Zhang took the lead and held the advantage with 80 metres remaining.

Swiss athlete Hug was also closing fast, but 33-year-old Weir, of south-west London, just had too much pace for them in the final few metres.

Weir said: "I had to dig deep tonight - it did hurt." But he added: "I feel like I'm on top of the world at the moment."

Halifax racer Cockroft won the first of GB's three track golds on Thursday as she destroyed the field, dominating the race from the beginning.

"This is what I worked for four years for and I've actually done it now," she said. "I've got nothing to do now with my life, just work for Rio [in 2016] now and hopefully do it again."

Great Britain also won a silver and a trio of bronze medals on a memorable night for ParalympicsGB, that was dominated by Jonnie Peacock taking gold in the T44 100m final.

The world record holder, 19, from Cambridge, finished in a Paralympic record of 10.90 seconds.

Meanwhile British four-time Paralympian Dan Greaves was pipped to gold by Jeremy Campbell of the United States in the F44 discus.

Greaves, from Leicestershire, had broken the Paralympics record in the third round to take the lead, but the American bettered the Briton's 59.01m with 60.05m to take gold.

In the same category, his team-mate Paul Blake added an 800m bronze to the silver he won in the 400m.

The 22-year-old, who trains at the University of Bath, moved to the front after the first lap but was overtaken by Russian duo Evgenii Shvetcov, who won gold, and Artem Arefyev with 150 metres left.

The 19-year-old came through late to snatch third in the T46 100m, before sprinting around the track after the result was confirmed in the stadium.

Earlier in the day, 37-year-old Beverley Jones won a Paralympics medal at her fourth attempt, with bronze in the F37 discus.