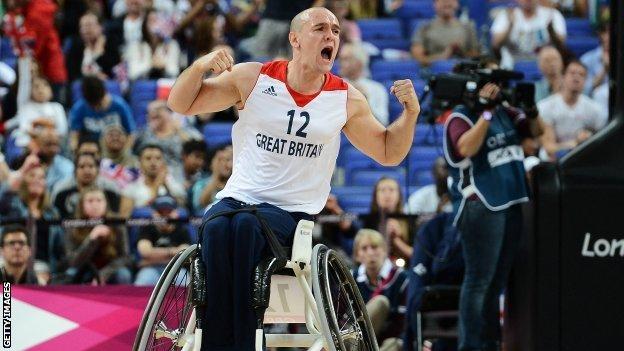 Great Britain missed out on a place in the men's wheelchair basketball final, losing their semi-final with Canada 69-52.

The Canadians, who won the silver medal in 2008, took the lead late in the first quarter and dominated from there.

The combination of Patrick Anderson and Joey Johnson were impressive with 17 and 15 points apiece.

GB will now face the United States on Saturday as they chase a third consecutive Paralympic bronze medal.

"It just wasn't meant to be tonight," GB forward Terry Bywater told BBC Sport. "I thought we played some decent stuff against one of the best teams in the world but we need to hold our heads high and bounce back against the US."

Coach Murray Treseder was critical of some of the refereeing calls in the first quarter but refused to blame it for the defeat: "We made too many errors and they punished us like a good team does and they were the better side."

Although GB defended well in the first half, particularly against Anderson, they started to struggle with their scoring and Canada led 33-27 at the break.

Canada came out strongly in the third quarter and Anderson hit two quick baskets to help extend their lead.

By the end of the third quarter Canada led by 20 points (59-39) and, although GB tried to apply some pressure to get back into the match, Canada held firm to reach yet another Paralympic final.

With the Americans losing 72-63 to Australia, it means both the final and the bronze play-offs are a repeat of four years ago.

Earlier, the GB women's team lost 72-55 to China and will face Mexico to decide seventh and eighth place on Friday.