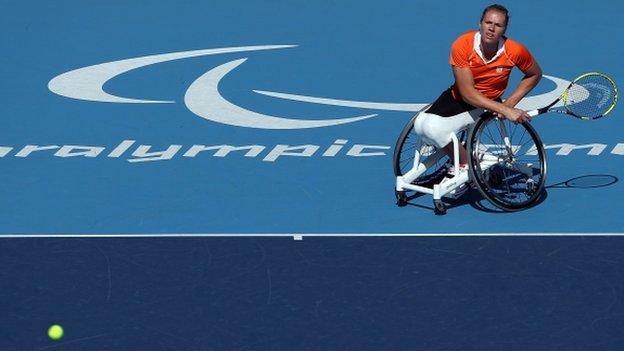 The 31-year-old barely had to get out of third gear and she wrapped up the victory in 59 minutes.

Vergeer and Van Koot had met five times already this year, with Van Koot managing to take just one set, and she looked nervous in her first Paralympic final, being broken three times in the opening set.

She won back-to-back games in the second set to close the gap to 4-2 but Vergeer was in no mood to be denied and she upped her game, sending a rasping forehand down the line to seal yet another win.

An emotional Vergeer, whose last singles defeat came in January 2003 to Australian Daniela di Toro, broke down in tears while being interviewed after receiving her gold medal and said she was nervous coming into the final.

"There was so much pressure on me," she told BBC Sport.

"Everyone just expected me to win gold and expected that it would be easy and I would have no competition but I still had to do all the things a top athlete does to be on top of their game.

"A lot of people sometimes forget about that but I worked hard and it has finally happened. This is what I have dreamed about, thought about and did everything for and it is amazing to win."

Vergeer, who was left paralysed after an operation on her spinal cord when she was just eight, could win a second gold when she partners Marjolein Buis against Van Koot and singles bronze medallist Jiske Griffioen in Saturday's doubles final.

But she also admitted that she is unsure about whether she will defend her title in 2016.

"I don't know what is going to happen and be part of my social life or private life in the next four years, but as long as I enjoy training and enjoy tennis I will still continue."

Meanwhile, Britain won bronze in the women's doubles after Shuker and Whiley staged a superb comeback to beat Khanthasit and Techamaneewat 6-7 (8-10) 7-6 (7-2) 6-3.

The Britons struggled early on and found themselves a set and 3-0 down, but saved two match points in the 11th game of the set before cruising through the tie-break and taking control of the final set.

The third seeds have become the first women to win a Paralympic medal for GB in the sport.

"At the point when we were a set and 3-0 down, I knew I had to get my act together and I did. We turned it around and it is amazing," said Whiley.

"I can't express how scared I was facing those match points but I had every confidence in our abilities and I knew we could make it."