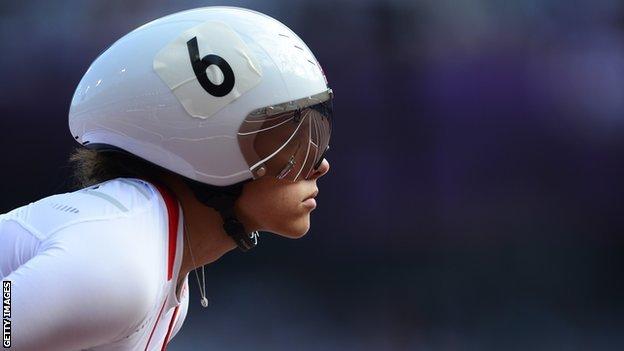 A sport-by-sport round-up of how ParalympicsGB athletes perform on Day Nine of the 2012 Paralympic Games in London.

Richard Whitehead finishes seventh in the final of the men's 100m T42 in a time of 12.99 seconds.

Kyron Duke misses out on a medal in the men's javelin F40 final, finishing in eighth with a personal best mark of 38.64m.

Stephen McGuire loses his mixed individual BC4 semi-final 12-0 to his Chinese opponent.

David Smith is through to the individual BC1 final after winning his semi-final tie 5-2 against Norway's Roger Aandalen.

Peter McGuire loses on a tie-break in his play-off against Wai Yan Lau of Hong Kong to finish eighth in the BC4 class.

BRONZE MEDAL - Rachel Morris, after dislocating her shoulder in a car accident last year, wins bronze in the women's individual H 1-3 road race in a time of 1:43:08, with fellow ParalympicsGB rider Karen Darke narrowly missing out on a medal in fourth 1:43:08.

ParalympicsGB men lose 4-3 against Argentina and will go into the play-off for 7th/8th place.

ParalympicsGB lose their men's classification match 3-0 to China and finish eighth in the competition.

Hannah Russell finishes fourth in the final of the women's 50m freestyle S12, with a time of 28.07 seconds.

Andrew Mullen finishes fourth inthe final of the men's 50m butterfly S5 with a time of 40.04 seconds. Anthony Stephens earlier missed out on the final.

Sascha Kindred, swimming in what is likely to be his last individual race, was disqualified in the final of the men's 50m butterfly S6. Kindred speculated after the race that the disqualification was related to his leg action.

Louise Watkin (1:04.45) and Lauren Steadman (1:06.07) finish fifth and eighth in the final of the women's 100m freestyle. Claire Cashmore had earlier missed out on a place in the final.

ParalympicsGB women finish their London 2012 campaign in seventh place, one place better than in Beijing, overcoming Mexico 59-37 in their classification match.

ParalympicsGB women, Gemma Collins, Justine Moore and Gabby Down lose 45-26 in their open team quarter-final against Hong Kong, and finish eighth in the competition after losing their classification play-off 45-33 to France.

ParalympicsGB lose their group A match 51-39 to Japan, meaning the home team's chance of a medal at London 2012 is over.