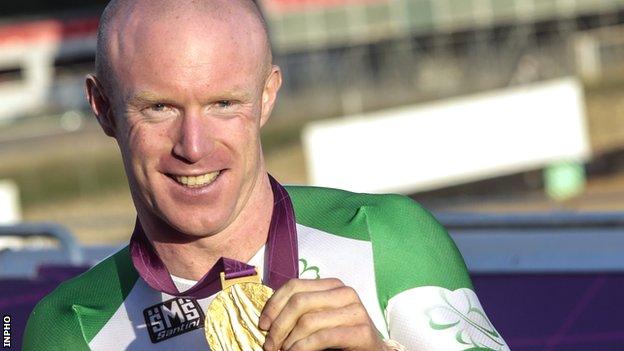 Irish cyclist Mark Rohan clinched his second gold medal of the Paralympics as he won the H1 road race on Friday.

Another great morning for the Irish was continued by Catherine O'Neill's silver medal in the F51/52/53 discus.

Friday's success brings the Irish medals haul up to 15 with seven golds, three silvers and five bronzes landed so far.

And Jason Smyth will be an overwhelming favourite to win another Irish gold in the T13 200m final in the Olympic Stadium on Friday evening (19:18 BST).

Wheelchair competitor Rohan played gaelic football for the Westmeath Under-21 team before being paralysed in a motorbike accident in 2001.

"This was an amazing race, it was so hard, there were six of us going round the fourth lap," Rohan said.

"The guys we thought would be there weren't there, so it was a bit of a shock. You start thinking about the time trial, 'Have those guys saved themselves for this road race?'

"I knew, if it came down to a sprint, I had a good chance to take him (Frankhauser). I had to work hard those last two laps."

Wexford woman O'Neill, 36, threw 5.66m to take second behind Britain's Josie Pearson in the discus event in the Olympic Stadium.