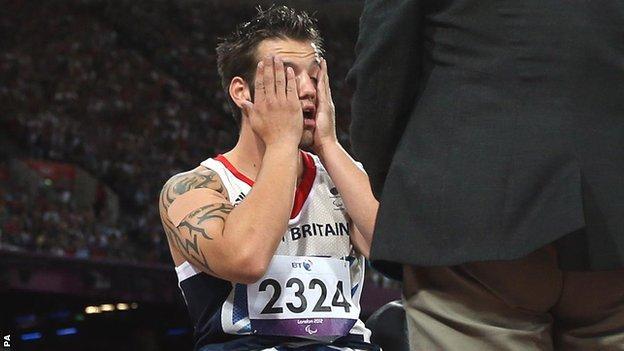 Nathan Stephens suffered heartache on the penultimate day of the London 2012 Paralympic Games in the F57 javelin.

The 24-year-old from Bridgend came into the games as world record holder and world champion.

But two no-throws followed by a poor third attempt saw him finish outside the top eight in the final and so denied a further three throws.

Eleven Welsh athletes have contributed to 14 medals, which matches the total won in Beijing four years ago.

Stephens was deeply unhappy at being called for two no-throws for having his foot off the floor, telling Channel 4: "The officials need to be aware of the rule. It's the same as it was in [the 2011 World Championships] New Zealand and that was fine.

"When my bottom is in contact wth the seat then I'm allowed to lift my foot, but they say it's because my foot was off the floor.

"I'm disappointed with myself. But after the red flag my head went."

Earlier on Saturday, Rhys Jones ran a personal best 12.19 seconds in his T37 100 metres heat but finished fifth, ending his interest in the competition.