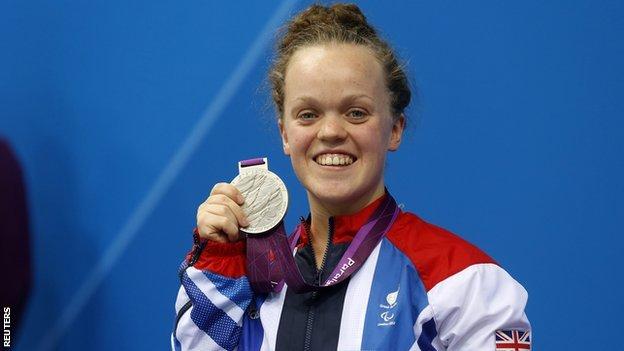 Ellie Simmonds was denied a third gold medal of the London 2012 Games by a phenomenal swim and world record from Victoria Arlen of the United States.

The American, who almost missed the Games after classification controversy, held off the 17-year-old's challenge to finish in one minute 13.33 seconds.

"I am gutted as the 100m free in Beijing made me the person I am," Briton Simmonds told BBC Radio 5 live.

"I hate losing but Victoria was unbelievable."

Swansea-based Simmonds, who finished in 1:14.82, conceded there was little she could do to catch Arlen, who came to prominence at the US trials in June.

"It was a tough race. I could see her in the last 15m and I put my head down and went for it, but I didn't have it," said Simmonds.

"I did a PB and it would have been amazing to get my title again, but for her [Arlen] to go 1:13 was unbelievable."

"I am so chuffed to have had a great competition and achieved personal bests in most events," stated the teenager.

Arlen, who was paralysed in 2006 by a virus that affected her spinal cord and also left her in a vegetative state for two years, was deemed "ineligible" for the Games by the International Paralympic Committee on the eve of the competition, but later won an appeal.

"It has been a rollercoaster ride, especially after the last few months," admitted Arlen.

"I don't even know how to react [to gold], I am in shock and I just wanted to go out there and give it my all."

Harriet Lee won Britain's first medal on the final night of Paralympic action at the Aquatics Centre with bronze in the SB9 100m breaststroke.

It was an incredible achievement by the 21-year-old, who has Beckwith-Wiedemann syndrome - a type overgrowth disorder - as just four months ago she spent time in intensive care due to her condition.

Jack Bridge finished fourth in the SB9 100m breaststroke final in 1:10:40, but he was a full three seconds off the medal positions, which were led by Russia's Pavel Poltavtsev.

Bridge returned for the breaststroke leg of the men's 4x100m medley relay team with James Crisp, Sean Fraser and Thomas Young, which was a revised line-up to that which qualified quickest for the final.

However, they found themselves down in fifth after the first leg and could not claw that back, finishing in that position in 4:20:54.

China took the final swimming gold of the 2012 Games with victory over Russia by four one-hundredths of a second, with Australia completing the podium.

Great Britain finished the London Paralympics with 39 medals in the pool [seven gold, 16 silver and 16 bronze], two short of their Beijing total and with four fewer golds.