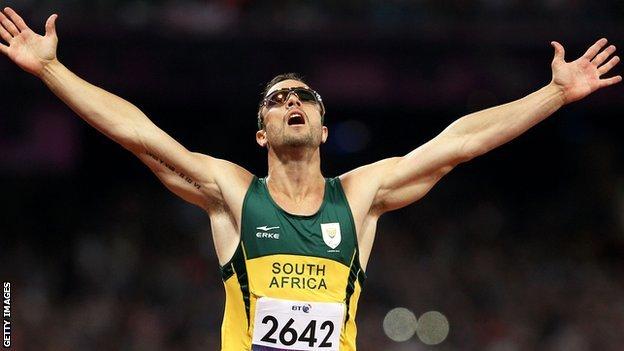 South African Oscar Pistorius provided a fitting finale to the Paralympics track and field competition with gold in the last event, the T44 400m.

The 25-year-old, promoted as the face of the Games, went into the final without an individual gold but won in a new Paralympic record of 46.68 seconds.

Pistorius also won gold in the 4x400m relay and silver in the 200m.

"I think it's how the athletics had to end. It was perfect having Oscar Pistorius as the last event. I am pleased for him as an athlete. You could tell he felt despondent about his performances in his other events, so after all the pressure on him, it's a huge amount of relief. It was never going to be easy to do the two events (200m and 400m) back to back. I was a bit disappointed with Alan Oliveira but it proves he can't run a 400m."

Defending champion Pistorius was expected to win the race easily, although at the 200m mark it appeared that Brazil's Alan Oliveira, who stunned the South African in the 200m, might just cause another Paralympics shock.

But Pistorius pulled away from his main rival coming into the final, with 20-year-old Oliveira tying up badly in the home straight and passed by the American pair.

"It was the 11th time I was able to come out on the track and I just wanted to give the crowd something they could appreciate and take home with them.

"I was very nervous before today's race. I was quite tired but the crowd really kept me going.

"For the first time I was actually thinking about something beside my race coming into the home straight.

"I could hear the crowd, which was very weird and so loud. I thought 'let's just finish off on a good note'."

There was no final flourish for Great Britain's athletes in front of a capacity 80,000 crowd.

Jarrow sprinter Hazel Robson finished seventh in the T36 100m - the 33-year-old, who has cerebral palsy, won gold in the event in Sydney.

Britain have dropped from second to third in the overall medals table behind Russia, which now has 35 golds to GB's 33, with Ukraine just behind on 32 and Australia on 31 ahead of the final day of competition. China are way out in front with 95 golds.

Elsewhere in the Olympic Stadium, world records fell, including in the crowd-pleasing F46 high jump final. Poland's Maciej Lepiato shattered the previous best of 2.05m with a 2.12 clearance.

Meanwhile, South Africa's Fanie van der Merwe fell over the line to take the T37 100m title. He recorded the same time as China's Liang Yongbin - a world record of 11.51 - but was given gold following a photo finish.

The athletics competition finishes on Sunday with the marathons, with GB's David Weir attempting to win a fourth gold of the Games in the men's T54 event starting at 1130 BST.