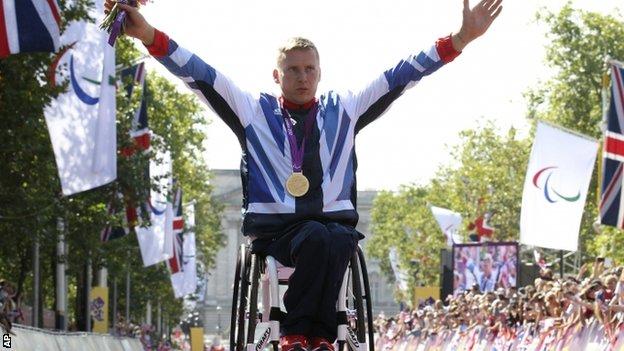 After 11 days of thrilling, emotion-charged action, the London Paralympics is over.

Great Britain's David Weir, Jonnie Peacock and Hannah Cockroft are just three athletes who shone on the track while Ellie Simmonds was once again the ParalympicsGB star of the pool.

Oscar Pistorius won individual gold on the final day of action in the Olympic Stadium, while China proved once again that they were the top dogs of Paralympic sports by topping the medals table with 95 golds.

We asked BBC's pundits to pick their favourite memory and their athletes of the Games.

"My favourite moment occurred inside the Olympic Stadium on Wednesday morning just after 9.20am.

"The crowds at the Paralympics and Games Makers have made it brilliant."

"I like to call it 'Super Saturday' Part 2 - the day when Ellie Simmonds defended the 400m freestyle title and broke a world record in a battle with Victoria Arlen.

"It just proved that even with all of the drama of the classification issues with Arlen, in the end it came down to the swimming. The two 17-year-olds didn't get drawn into it. They just went out there and had a great battle - the crowd loved it.

"On the same day my best friend Claire [Cashmore] got a silver medal and I had a bit of an emotional interview with her."

"It was jaw-dropping stuff. You could hear some of the people who were watching the sport for the first time saying this game is just awesome and really getting addicted to it.

"It is great that it has got that exposure and hopefully get more viewers but it was just great to hear people talking about the sport."

"I took into account the rollercoaster of emotions he's gone through.

"He knew London was going to be his time and that it's unlikely he will be at another Paralympics.

"I admired the fact he won the first gold, then the second, before calming his emotions in such a competitive race which featured the likes of Swiss Marcel Hug and China's Zhang Lixin.

"He seems to have the knack of putting himself in the position to attack."

"My moment of the tournament was in a game in the men's preliminary round.

"It was when Canada's Patrick Anderson, who is probably the best player in the world, sent a bounce pass to his long-time team-mate Joey Johnson whose chair was spun away from the basket, but he still managed to show great skill and poise to put it in the net.

"Anderson came out of retirement for London 2012 and finished up with a third Paralympic gold medal."

"I think for me it was Alex Zanardi's celebration after winning the handcycling time trial to clinch his first gold medal. He jumped out of his racing chair, kissed the ground and then waved the bike above his head. He just comes across as a guy who is totally without anger about what has happened to him, he loves life and is always looking forward to see what is the next challenge."

"My best memory of the Games has nothing to do with the Aquatics Centre.

"For me, it's been walking around the Olympic Park, meeting people, especially young kids, who are excited about disability sport and meeting those who would not have had disability sport enter their consciousness without the Games.

"About 50% of the kids I've spoken to say they love goalball and they love the excitement of not being able to cheer during the action, then suddenly going crazy when a point is won or lost. That's the highlight for me.

"It's 13-time Paralympic champion Matt Cowdrey, who is now Australia's most successful Paralympian of all-time. He won five gold medals in London and is an absolutely amazing swimmer.

"Disability can mask the ability and talents of an athlete so it's hard to match people from different classes, like Brazil's Daniel Dias [who won six gold medals in London].

"But I love watching Cowdrey swim and he's also a fantastic ambassador, not just for swimming, but for Australia and the Paralympics."

"That's a hard choice, but I have to say David Weir.

"He won three golds on the track in the deepest competition in athletics.

"They set unbelievably tight qualifying - the guys were pushing 97% of the world record in order to just get here.

"What Dave did was just amazing. He was smart, controlled and didn't panic. The way he raced was stunning."

"I went to watch the first game they played against the United States and it just seemed that he upped the whole pace of the match. To see someone with his presence on the court was just brilliant."

"It has got to be Ellie Simmonds for me with the age thing.

"A lot of stars have come through, but Ellie has shown so much maturity and really embraced it."

"My star of the Paralympics has been Netherlands point guard Inge Huitzing who has been absolutely fantastic and been a key figure for her team.

"I think she has been the most complete player in either the men's or women's wheelchair basketball tournaments.

"She helped the Dutch beat the USA to win bronze, but in truth they are a far better team than that."

"David Weir is my favourite athlete. You have to look at what he's done since he was a young 17-year-old taking part at the Atlanta Games.

"He took a bit of time away from sport, he had glandular fever and injuries - he had a lot of reasons to leave the sport.

"At this year's London Marathon he was like a caged animal.

"He's a machine and he deserves the respect and credit he'll hopefully get now."

"I like to pick the underdog usually, but I have to go with Ellie Simmonds. She came into this with a lot of pressure on her shoulders with her world records broken [by Arlen].

"Could she handle the attention after the way she came out of Beijing as the golden girl thrust into the public eye?

"She did so with such maturity, and I take my hat off to how well she coped with the emotion and demands of it all. She has put Paralympic sport in a great light and on to the map."