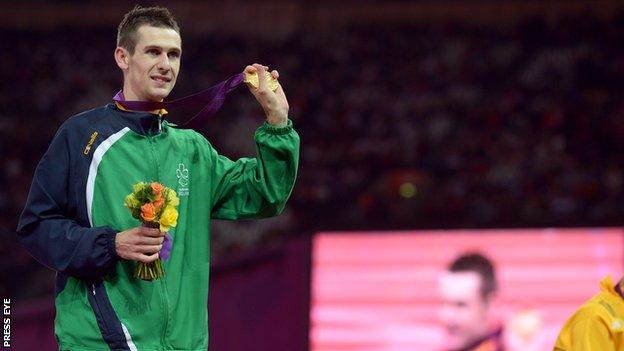 Paralympic star Michael McKillop's hopes of running in the able-bodied European Cross Country Championships have been hit by a broken wrist.

McKillop, a double gold medallist at the London Paralympics, fractured a bone in his right wrist when he fell off a bike while on holiday in Rome.

The 22-year-old from Glengormley, was due to have surgery on Wednesday.

McKillop, who has a mild form of cerebral palsy, won the T37 and 800 and 1500 metres events at the London Games.

His father and coach, Paddy McKillop, said the accident happened during a sightseeing tour in the Italian capital.

"It was just a freak accident, and he has a few bruises as well as the fracture," he said.

"Our plans are in disarray. Michael had been aiming to make the Irish Under 23 able-bodied cross country team for the European Championships in Budapest in December, but that is now unlikely."

McKillop fractured the scafoid bone in his right wrist and is being treated in a Belfast hospital.