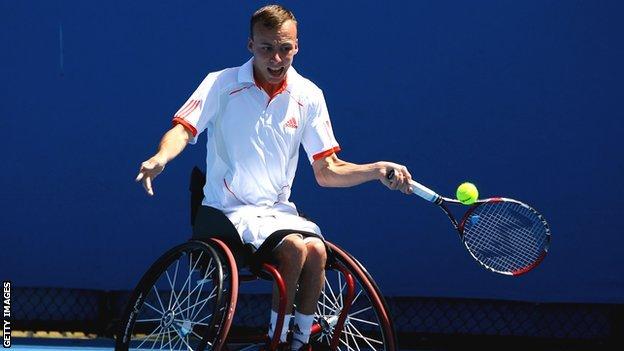 Britain's Andy Lapthorne lost out for the second year in a row in the quad singles final at the NEC Wheelchair Tennis Singles Masters in Belgium.

Lapthorne, 22, found world number one David Wagner too strong as the American triumphed 6-4 6-2.

Wagner had also won the pool match between the pair on Thursday 6-3 6-0.

The Briton, who won Paralympic doubles silver with Peter Norfolk at London 2012, was beaten in last year's final by Israel's Noam Gershony.

The quad division is for players who have an impairment in three or more limbs.

Britain's other representatives Gordon Reid and Lucy Shuker missed out on the semi-finals in the men's and women's singles events.

Reid, who was making his first appearance in the end-of-season event, finished seventh after his opponent Michael Jeremiasz of France withdrew from their match through illness while Shuker was beaten by South Africa's Kgothatso Montjane 6-4 6-3 in their 7th/8th place play-off.

Reid and Shuker will be in action again in next week's Doubles Masters which begins in Amsterdam on Wednesday with Reid partnering fellow Briton Marc McCarroll while Shuker will again team up with Jordanne Whiley, with the British pair hoping to add to their London Paralympic bronze medal.