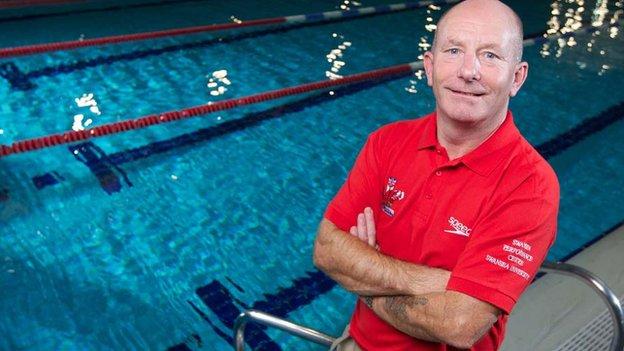 Paralympic Games swimming coach Billy Pye has been named Sport Wales Coach of the Year for 2012.

He pipped Wales rugby coach Warren Gatland to the high performance coach of the year award.

Coach of the Year winners

Sporting partner of the year: The Outdoor Partnership

Coach to disabled sportspeople of the year: Mike Hayes

"His success is something which all of us in Welsh sport are proud of," said Chair of Sport Wales, Professor Laura McAllister.

"Billy is rightly viewed as one of the top coaches in UK sport and world swimming.

"It has been an unforgettable year for sport in Wales and it has been a pleasure to recognise these individuals who have contributed so much at grassroots and elite level.

His swimmers returned from London 2012 with a medal haul of 11, including two golds and two world records.

Simmonds, who won two golds, also won a silver and a bronze medal in the pool at London 2012.

Stephanie Millward also picked up five medals, four silvers and one bronze. And there were bronze medals too for Sam Hynd and Matthew Whorwood.

Gatland and his Wales coaching team did get special recognition for their successful and consistent year of performances, including a 2012 Six Nations Grand Slam.

The Welsh Government funding helps Sport Wales to invest around £5 million each year in grassroots and elite coaching across the country.

Sport Wales, along with its partners, has committed to doubling the number of coaches and volunteers in Wales, to around 250,000 by 2016 - around 10 per cent of the population.