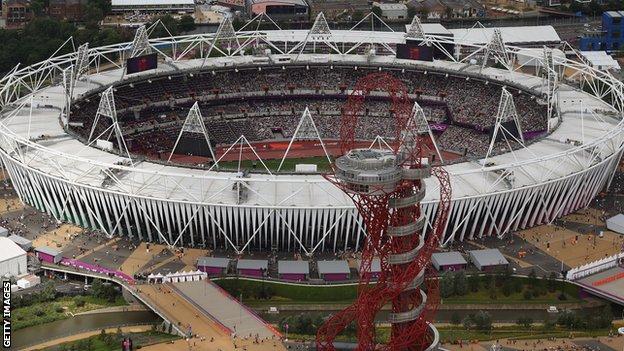 London has won the right to host the 2017 Paralympic Athletics World Championships.

The Championships will be held at the Olympic Stadium just one month before the World Athletics Championships.

It is the first time a city has hosted the two championships in the same year.

"London's Paralympic Games were the first ever to sell out, and these Championships provide a perfect chance to build on that enthusiasm," Mayor Boris Johnson said.

"By bringing the IPC Athletics World Championships to our wonderful Queen Elizabeth Olympic Park just a month before the World Athletics Championships, the capital is poised to recreate the magic of 2012."

This summer's Paralympic Games was hailed as the "best Games" in history by the International Paralympic Committee (IPC) president Sir Philip Craven.

Every session of the athletics competition at the Paralympics drew sold-out crowds of 80,000.

What is the Gold Event Series?

"We want to build on the huge success of the London 2012 Paralympics so I am delighted that the International Paralympic Committee has awarded London the honour of hosting its 2017 Athletics World Championships," said Minister for Sport Hugh Robertson.

"This is the latest in a long line of top class sporting events that will be staged in the UK over the next few years. Hosted in the iconic Olympic Stadium, I know it will receive huge support from the British public."

UK Sport previously announced a campaign to create an Olympic legacy by bringing 36 World and European championships to the United Kingdom.

The Gold Event Series will use £27m of lottery money over the next six years and aims to bring a total of more than 70 sporting events to the UK.

Among the events being targeted are the semi-finals and final of football's European Championship in 2020 and the Hockey World Cup.

The Diving World Series, the World Triathlon Series, the World Figure Skating Championships and the Track Cycling World Cup are also being targeted as part of the campaign, which has been launched as a partnership between UK Sport and the Department for Culture, Media and Sport.