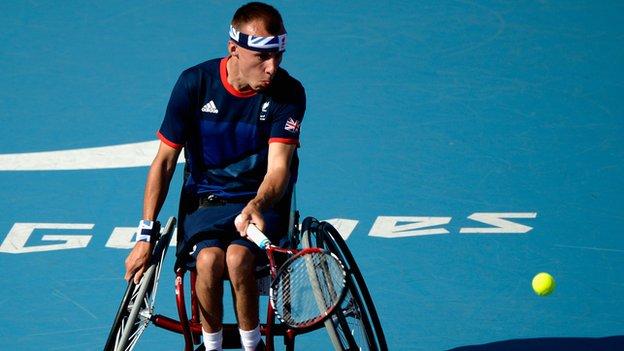 Britain's Andy Lapthorne warmed up for this week's wheelchair tennis events at the Australian Open with victory at the Melbourne Open.

He will be back in action in Melbourne later this week.

There was also victory for Gordon Reid in the men's doubles, although the Scot lost in the men's singles decider.

But the world number eight from Helensburgh, who was chasing his second title of the year after victory in Adelaide a fortnight ago, found Frenchman Michael Jeremiasz too good in the singles final.

Jeremiasz, the world number six, retained his crown with a 6-3 6-3 win over Reid, who had beaten world number five Gustavo Fernandez of Argentina in the semi-finals.

Reid narrowly misses out on a place at the Australian Open, with only the top seven players in the world guaranteed entry but Lapthorne will be hoping to land his first Grand Slam singles title.

Lapthorne, who won Paralympic doubles silver with Peter Norfolk in London, will again face Hard as well as American Nick Taylor, but his biggest challenge will come from world number one David Wagner.

Britain's Lucy Shuker will be in action in the women's singles and doubles events where world number two Aniek van Koot is the favourite in the absence of her all-conquering Dutch compatriot Esther Vergeer.