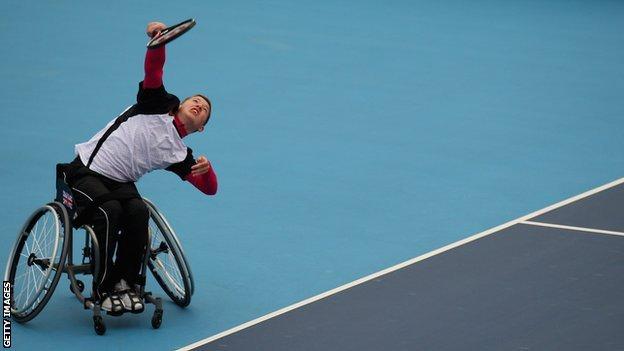 The 15-year-old, who is the world's top ranked junior, swept aside Carlos Anker of the Netherlands 6-1 6-0.

He also won the doubles title when he and American Chris Herman beat Anker and Nico Langmann of Austria 6-4 6-2.

His fellow Briton Lauren Jones, who is top of the girls rankings, was unable to take part in France through illness.

Hewett, who is ranked 59 in the seniors, was in superb form throughout the event - which is the top event for juniors - dropping just eight games in his four matches en route to the final. And he was equally impressive in the decider against the world number four junior.

The teenager from Acle in Norfolk, who started playing when he was seven, went top of the junior boys' rankings earlier this month.

He will now be hoping to follow the achievements of GB Paralympian Gordon Reid, who won back-to-back Junior Masters titles in 2008 and 2009 and is now world number nine in the senior rankings, as well as fellow top ten players Nicolas Peifer of France and Belgium's Joachim Gerard, who are also past winners of the event.