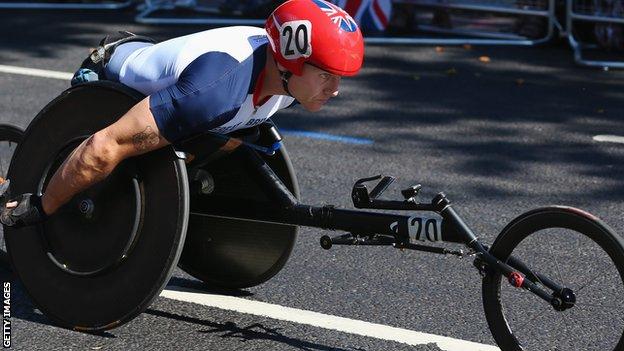 It comes as no surprise that David Weir has already set his first target for 2013.

The 33-year-old, who won four gold medals at the Paralympic Games in London, returned to training in January and has set his sights on victory in April's London Marathon.

"I always said I'd have a good break after the Games," the wheelchair racer told BBC London 94.9.

"I have a break after every four-year cycle.

"Mentally, more than physically, the build-up for London was seven years from when we won the bid.

"There was a lot of pressure on British athletes. I did feel it but I didn't show it. It does mentally drain you for a while.

"You need a break from the pressure but then you have the hype after from the success you have had.

"I promised my family I wouldn't go back to training until after Christmas.

"It will be a tough ask to get into good shape for London but I like a challenge.

"To keep the fire in my belly I have still got challenges I want to fulfil."

Following his golden haul in London last year - made up of victories in the and the marathon - Weir is now aiming for a record-breaking seventh London Marathon title.

The prospect of creating history in the capital on Sunday, 21 April is currently his driving factor.

"I thought last year's [London Marathon] was my last one but when you sit and look at the record books, I'm still on equal par with Tanni Grey-Thompson," the Londoner said.

"It wasn't my best race because I was so nervous and I didn't want to get anything wrong.

"I wanted to win on the first night, but to go out in the stadium and hear that roar and wave that followed you around the 12 and a half laps is the best feeling I have ever experienced in my life.

"To cross the line in your home Games is the best feeling you can imagine.

"You train so hard and you think of the dark days when you're training at seven in the morning."

"Until I get that seventh win it might be my last one but it might be this year, next year or the one after.

"I'll carry on until I've got that record for the Marathon.

"I'm looking at more road-racing this year than the track."

The four golds in London took Weir's tally to six Paralympic golds from his four Games, and 10 medals in total.

Weir says his success in London has made him reconsider whether he will continue competing until the Rio de Janeiro in 2016.

"It will be a two-year build up if I decide," he said.

"If you asked me last April, I didn't think I'd be signed up for the London Marathon [in 2013], let alone Rio.

"I thought the Paralympics in London would have been my last one but everything went so well.

"Before the Games I was only winning races by millimetres, even in marathons, and it was getting tougher and tougher.

"But when I went into the Games I was in the best shape ever. I won my races by chair's length or a couple of chairs' length.

"It was probably my best race tactically.

"On the warm-up track that evening I was two miles an hour quicker because I wasn't nervous as I had achieved what I wanted - win a gold medal in my home Games.

"I felt at ease and knew the other competitors were scared. I could see it in their eyes.

"I went with a lap to go as I knew with my top-end speed I could win the race."

"I hadn't done that for years so I knew there was still more in my body and mentally as well, that I could train at a high level.

"I think I could still do the four events [in Rio], but it depends what my body could take.

Despite his current focus on the London Marathon and a seventh victory, Weir is unsure of what his exact plans will be for the rest of this year.

"You have to take each year as it comes," he said.

"I am doing the Marathon but are not sure about other races.

"There are a couple in the pipeline I want to do.

"Next year is the Commonwealth Games, so I've got a two-year target at the moment, and we'll see after that.

"The way I won the races in London, I know I've got a lot more in me, which is good to see."

Weir's success at the London Paralympics has made him one of Britain's best-known sporting names, which was evident in him being voted into fifth place in the BBC's Sports Personality of the Year award last year.

However, the Surrey resident says he has been able to cope with the extra media attention following his success.

"The marathon is the one that stands out the most.

"When I started preparing for the whole year we sat down and I said I wanted to win the marathon.

"I just had that vision of me winning down the Mall, going on the podium and winning the last race of the whole 2012 package.

"It got me motivated to train harder on the road. It developed my technique on the track.

"To win that and get on the podium was a special, special day."

"It's been easy actually," he said. You expect it when you do well.

"With Paralympic sports we've never had this much publicity after a Games.

"If you look at the crowds, the TV and radio coverage and look at all the papers; you have some knowledge that something is going to go bang afterwards in the public eye.

"You prepare for that and it's been great.

"I'm not complaining because us Paralympians were moaning we're not in the public eye enough and now we are. We've been asking for it for years."

Great Britain won a total of 120 medals in London, with 34 of them gold, and Weir believes the success of the Games as a whole, which raised the profile of disability sport, will continue.

"I hope the buzz carries on for a long while and not just the year after.

"I think it will. We have had a number of wheelchair athletes come in my club and start the sport and they are loving it.

"I think the buzz will carry on until Rio. You can see the effect the Paralympics has had on the world."