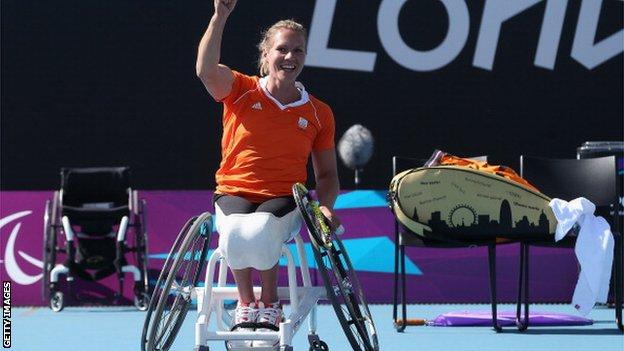 The last time she lost was to Daniele di Toro in Sydney on 30 January 2003, winning the next 470 matches.

The 31-year-old Dutchwoman, who won her fourth consecutive Paralympic singles gold in London, tweeted on Tuesday she had "officially stopped tennis".

Vergeer took the number one spot in her sport in 1999 and only lost it after missing January's Australian Open.

Vergeer's 10 years at the top

Although possibly less well known than sportsmen with a fraction of her achievements Vergeer is described by Rafael Nadal as 'amazing' for her will and ability and lauded as showing, 'true love and passion' for her sport by Maria Sharapova on her website.

Earlier this month, she told BBC Sport: "If I'm going to continue playing, I'll play because I want to be better than before. I enjoy tennis, and if one day I feel I am not enjoying it as much, I'll retire and start doing other things."

Vergeer won the first of her four first gold medals in Sydney in 2000 and her record of victories had been compared to the squash legend Jahangir Khan's 555 consecutive wins between 1981 and 1986 - a target many thought she would try to emulate.

What they say about Vergeer

Richard Krajicek: "Maybe the most successful athlete of all time."

Rafael Nadal: "Amazing for her will and ability."

She took a break from the sport last year to consider her future after the 6-0 6-3 victory over compatriot Aniek van Koot in the Paralympics final.

"This is an amazing life still so why quit while I'm still winning? But it's not like I'm aiming for the 500 unbeaten record, 600 or whatever," she said.

Vergeer was just a "little girl" when she started playing wheelchair tennis after losing the use of her legs aged eight following spinal surgery, and she has seen the sport gain greater attention during her career.

Last year she reflected: "It's so amazing that I can spread the message to the world that if you have a disability there's so much that you can still do, and a lot of people in the world still don't know that."

Always grounded during her success, Vergeer said: "Everybody expected me to win gold [in London], but I still had to be at the top of my game. A lot of people forget that."

Vergeer has been tipped as a possible sports administrator for the Dutch Olympic Committee.