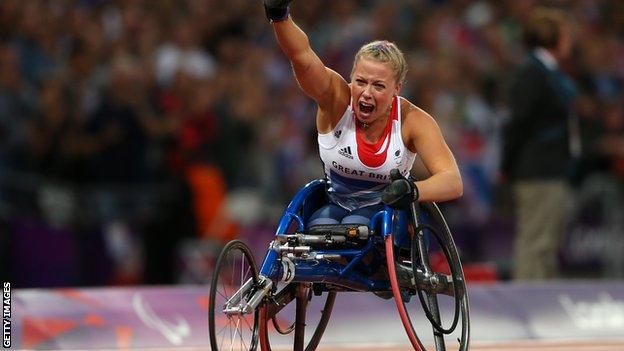 When you are a double world and Paralympic champion at the age of 20, you could be forgiven for just wanting to rest for a while.

But Hannah Cockroft is planning more than another decade in wheelchair racing, less than six months after she sprinted to a sensational golden double in London.

That will be music to the ears of officials at the British Paralympic Asssociation, who in Cockroft have unearthed an explosive talent, as well as to all the fans she acquired by winning the T34 100m and 200m at the Paralympics.

Cockroft, from Halifax in West Yorkshire, describes her experiences in the Olympic stadium as "surreal" and she has been amazed and a little baffled by the response she has had to her success.

She said: "People are sometimes a bit star struck when they meet me and I'm like "I'm just Hannah, I'm just from Halifax - what are you doing?"

Her down-to-earth nature and wide smile, combined with her passion and motivation, make Cockroft a strong ambassador for her sport and also a media and commercial dream.

Since the Games, Cockroft says things have been "insane" - she has been a guest at the National Television Awards, a contestant on Celebrity Mastermind and has had regular media appearances - but she insists that her focus has now turned back to her sport.

"There is this whole legacy and everyone seems to be enjoying it but you never know when it's going to drop off so it is just about making the most of the opportunities," she said.

"But trying to fit training and all the appearances in is getting to be hard work so training is becoming the top priority again. Which is the way it should be in the lead-up to the World Championships we have (in Lyon) in July."

But far from a return to normality, Cockroft, who holds the world records for both 100m and 200m, is in the early stages of learning from her new coach, 14-time Paralympic gold medallist Chantal Petitclerc.

The Canadian, who has 21 Paralympic medals in total, took over the reins as Cockroft's coach when her long-term mentor Peter Eriksson moved to be the head coach of UK Athletics.

"In a selfish way, when Peter told me I was like, 'How could you do this to me?'.

"We had an agreement that Peter was going to coach me until 2020.

"But Peter has always wanted to be the head coach of an Olympic team - he's finally got what he wanted so I was very proud of him and very happy for him. The last five months have been really hard work though, trying to get used to the new ideas."

The transition has been made easier by the fact that Cockroft's new coach is not only someone she knows - Petitclerc was a mentor for the British team at London 2012 - but also one of her heroines.

Cockroft on her disability

"When I was born I had two cardiac arrests which damaged two different parts of my brain and that left me with deformed feet, deformed legs and weak hips. It also caused problems with my fine motor skills - so I struggle with tying shoe laces and I've got messy handwriting - and problems with mobility and balance. I can walk a little bit but it's just easier to be in a wheelchair when you're outdoors.

"There is no-one else in the world like me. They had never even come across this before so I was very unique - they said: "we don't think she's going to live that long, just be prepared for anything that could go wrong, she's never going to walk".

"There were a lot of negatives when I was born but I've got very supportive parents. At the time when I was a kid I probably hated them - they put me in walking frames and standing frames and splints and some truly horrible things that really hurt, but without all that determination to make me walk I'd just be sat down always. In the world today, that's not exactly ideal - since London 2012 it has got better but there are still places where you arrive in a wheelchair and you think 'well I'm not going to get in there today'.

"Because I was born with my disability I've never really seen it as a challenge. You get up in the morning and you get on with what you've got to do. If you've got a dream you just follow it. The Paralympics was just one of those things where I thought 'that looks pretty cool, I'll give that a go' and here I am."

Cockroft said: "I remember the first time I met Chantal, I was hiding behind Peter. I didn't want to talk to her and I was thinking "Oh my God, it's Chantal" - I was so excited.

"She is a massive inspiration and to a lot of people she is the best female Paralympic wheelchair racer we have ever seen - until I came along, obviously now I'm going to beat her!"

Cockcroft says she is disappointed she did not break either of her own world records at the Paralympics but insists that under Petitclerc's guidance, she can go much faster. And now she will have many more platforms to show the world her abilities.

Channel 4 has also shown its commitment to Paralympic sport, with a new deal in place to show the Sochi 2014 and Rio 2016 Paralympic Games, as well as this year's IPC World Championships in Lyon in July.

"The worry was that it was going to fade away like it did after Beijing," Cockroft said. "We had two weeks of 'Oh wow - you're amazing' and then the whole world forgets about you.

"But this time we're growing and we haven't just got the Paralympics to concentrate on - we have World Championships, European Championships and now we have the IPC Grand Prix and that's making us more elite. It is making us parallel to Olympians now."

Cockroft says the buzz generated by London is still continuing, especially in Britain.

She said: "In the four years before London it was literally your dad in the audience cheering for you and that was about it.

"But now I go to London and people will stop me and say 'well done'. London is one of the fast moving cities in the world where people forget what they've seen in five seconds, so for them to remember what you did nearly six months ago is fantastic.

"The feeling that I get now is that people want more chances to come and see what we can do."

And what will she be aiming to produce in 2013?

"This year the main aim is to retain my two world titles. A few more world records would be nice and, you know, just try to keep on top of the world."

Simple as that? If you are Hannah Cockroft then it seems to be.