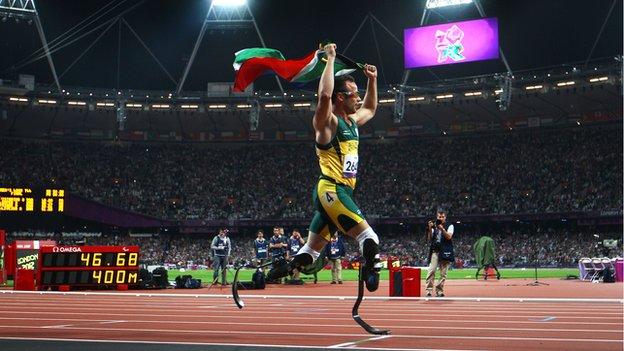 Oscar Pistorius was just 17 when he won gold at the 2004 Paralympic Games in Athens. Almost nine years on, the South African is a sporting superstar recognised across the world, appearing in global advertising campaigns and earning millions of pounds in lucrative sponsorship deals.

Born without the fibulas in both of his legs, which were amputated below the knee when he was just 11 months old, Pistorius is regarded as a pioneering spirit and the poster boy of the Paralympic movement.

Undaunted by his disability and backed by his parents, he has proved that disabled athletes are capable of competing against and holding their own with their able-bodied rivals.

At London 2012, he made history by becoming the first double amputee to run in an Olympic Games, progressing to the semi-finals of the 400m, Just a few weeks later, he added two more Paralympic golds to his growing list of accolades.

An athletics talent he may be, Pistorius began his sporting career on the rugby field. But when an injury sidelined him in 2003, he took up athletics.

A matter of months later, he made his Paralympic debut, running on prosthetics, known as cheetah blades, and earning the nickname "Blade Runner".

The boy with frizzy hair and braces created an instant stir, beating his more experienced single-amputee rivals to gold in the T44 200m and taking bronze in the 100m.

He won three more golds in his next major international outing, the 2006 IPC World Championships in the Netherlands, setting a new world record over 200m in the process.

But he was already starting to think bigger.

He expressed his intention to run at an Olympics and, by 2007, was competing internationally against able-bodied runners.

His participation was not universally welcomed, though, with some claiming he gained an unfair advantage because of the blades.

The IAAF, the body that governs athletics, was concerned enough to conduct research and eventually banned him from able-bodied competition in January 2008.

• Born without a fibula in either leg, Pistorius had his lower limbs amputated aged 11 months.

• His parents, Henke and Sheila, were advised that having the amputation done before he had learnt to walk would be less traumatic.

• His parents wrote their son a letter, to read in later life explaining their decision, which read "a loser isn't the person that gets involved and comes last, but the one who doesn't get involved".

• His mother died from an allergic reaction to treatment for suspected malaria when he was 15.

• At the age of two, Pistorius was given his first pair of prosthetic legs and had mastered them within days.

• He played water polo and rugby in secondary school and also cricket and tennis. An enthusiastic boxer, he also took part in triathlons and Olympic club wrestling.

• In June 2003, he shattered his knee playing rugby and, on the advice of doctors, took up track running to aid his rehabilitation.

• He has his mum's date of birth and death tattooed on his arm. He sports another tattoo on his back. A quote from the Bible verse 1 Corinthians 9:26, it begins: "I do not run like a man running aimlessly."

Pistorius, awarded the Helen Rollason Award for courage at the 2007 BBC Sports Personality of the Year awards, disagreed with the verdict and went to the Court of Arbitration for Sport (Cas) to fight his case.

After lengthy scientific tests, the ban was overturned in May 2008.

The suspension was lifted too late for Pistorius to compete at the Beijing Olympics but he made his mark at the Paralympics that year, winning golds and setting new Paralympics records in the 100m and 200m as well as a world record in the 400m.

The following year, he suffered head and facial injuries in a speedboat accident in South Africa and missed his chance to compete at the World Athletics Championships in Berlin.

At the 2011 IPC World Championships in New Zealand, Pistorius suffered his first defeat over 100m since 2004 when he was beaten in a thrilling photo-finish by American Jerome Singleton.

However, the South African was in superb form later that year, setting a new personal best of 45.07 seconds in Italy in the 400m and gaining selection for the 2011 World Athletics Championships in South Korea.

He reached the 400m semi-finals there and also took part in a preliminary round of the 4x400m relay. South Africa eventually took silver in that event without the help of Pistorius, who was not selected for the final, but he still collected a medal, becoming the first amputee to win an able-bodied world track medal.

In 2012, he became the first double amputee to compete at an Olympics, running in the 400m in London.

He made it all the way to the semi-finals, missing out on a new personal best but swapping race numbers with world champion Kirani James. He also competed in the final of the 4x400m relay and was also asked to carry the South African flag at the closing ceremony.

Pistorius was one of the faces of the 2012 Paralympics and was featured in a number of advertising campaigns ahead of the London showpiece.

He won two golds and a silver at the Games but finished outside the medals in the 100m, an event won by Britain's Jonnie Peacock.

Pistorius was also involved in one of the main controversies of London 2012. After being beaten into second by Brazil's Alan Oliveira in the 200m final, he criticised the length of his rival's blades immediately after the race before apologising for the remarks later.

He retained his marketing appeal, however. Sponsorship deals which include telecommunications firm BT and sportswear manufacturer Nike are thought to be worth £1.3m a year.