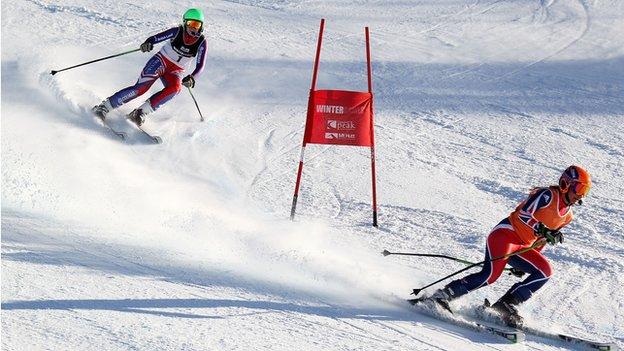 Visually impaired skier Kelly Gallagher and her guide Charlotte Evans secured their second medal of the World Championships in Spain with silver in the Super-G.

Gallagher, who finished fourth at the 2010 Vancouver Paralympics, came third in the downhill event on Wednesday. "I'm delighted to take silver to add to yesterday's bronze," said Northern Ireland native Gallagher. "To take gold at some point would be a dream."

There was also a bronze medal at La Molina for team-mate Jade Etherington and her new guide John Clark. "I'm delighted for my team-mate Jade," added Gallagher. "She's had a difficult season and did really well today."

Etherington has an impressive record of 27 medals from 29 races, but had been struggling to find a guide in recent months. The 21-year-old had only managed two training runs with her new partner before the competition.

"[The race] was really exciting," said Etherington. "Me and my guide John Clark were kind of using this World Championships as a trial. We haven't been skiing that long together - it's only been two days. But it was the Super-G so we thought we'd try it out and we managed a bronze medal, so [I'm] happy about that."

Gallagher and Evans were three seconds back (1:21.30), with Etherington and Clark pushing event favourite Henrieta Farkasova of Slovakia out of the podium places in 1:21.58.

"This is great for British skiing as we're all working really hard with the goal of next year's Paralympic Winter Games in Sochi in mind," said county Down woman Gallagher.

Great Britain have taken a squad of six skiers to the World Championships, the last major international competition ahead of the Sochi 2014 Paralympic Winter Games.

Friday will be a rest day for all competitors and competition will resume on Saturday with British sit-skiers Tim Farr and Mick Brennan, as well as standing skier James Whitley, set to begin their campaign in the slalom events.