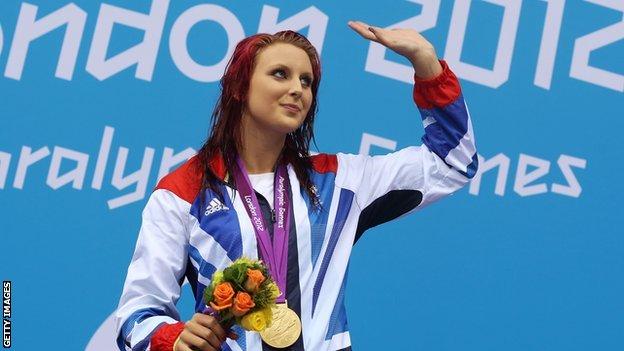 Paralympic gold medallist Jessica-Jane Applegate will aim to compete among able-bodied swimmers in 2013.

"She is the standout competitor in the S14 category at the moment and in disability swimming," her coach Alex Pinniger told BBC Radio Norfolk.

"So we've set goals this year around able-bodied swimmers."

City of Norwich swimmer Applegate, who has Asperger's syndrome, was a surprise winner in the 200m freestyle final at the London 2012 Paralympics and this week collected an MBE for her efforts.

Her progress has been notable and rapid, with the Great Yarmouth-born athlete claiming British records across numerous distances in freestyle, backstroke and butterfly.

And now she is aiming to qualify for the national youth championships in the summer, as well as the International Paralympic Committee World Championships in Montreal in August.

"The goals are to achieve a top-20 finish at the able-bodied youth nationals," said Pinniger.

"And she's about two tenths of a second away from a top-20 finish. It will be great to see how far up the rankings she can go.

"She has to overcome a lot of obstacles that able-bodied swimmers would take for granted, so it would be a phenomenal achievement to step up."

Applegate's progress has been aided by an increase in funding, after her Paralympic medal ensured she would step up from developmental to world-class athlete support.

"I've been coaching her for 18 months and in that time she's broken 70 British records. I don't know of many British swimmers that can boast those results," said Pinniger.

"She has a will to win - a hunger and desire to win races."