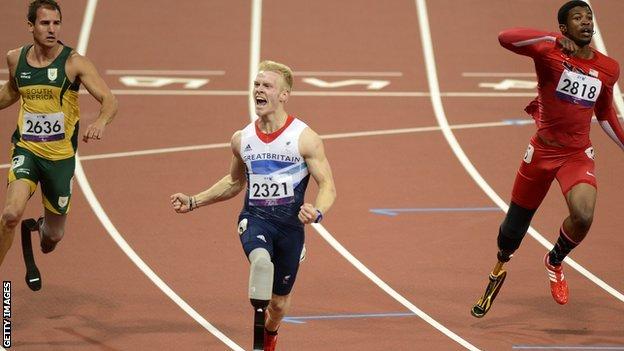 Birmingham's Alexander Stadium will host the 2013 IPC Athletics Grand Prix Final, which will feature some of the world's best Paralympic athletes.

The meeting, on Saturday 29 June, will be the seventh and final part of the IPC Athletics Grand Prix series.

More than 144 athletes are set to compete in 18 events.

Among those hoping to compete in Birmingham will be British London 2012 gold medallists Jonnie Peacock, Hannah Cockroft and Aled Davies.

The Grand Prix Final takes place three weeks before the IPC World Championships in Lyon and is the day before the British Athletics Birmingham Grand Prix at the same venue.

The IPC Athletics Grand Prix started recently with a three-day meeting in Dubai which featured 460 athletes from 32 countries. In April there will be meetings in Beijing, China and Sao Paulo, Brazil while in May athletes will compete in Grosseto, Italy and Arizona, USA.

The final meeting prior to Birmingham takes place in mid-June in Berlin, Germany, where there will be a strong British contingent.

Ed Warner, the chairman of the IPC Athletics Sport Technical Committee, said: "We are delighted that Birmingham will stage the final event of our IPC Athletics Grand Prix.

"We created this Grand Prix to give athletes a chance to compete on the highest level and we are confident that many of our best athletes will come to Birmingham to test their form ahead of the World Championships in Lyon in July."

Wheelchair racer Cockroft, who won gold in the T34 100 and 200m last summer is looking forward to racing in front of a home crowd again.

"I am really excited to see that the UK has another opportunity to showcase high quality disability sport in Birmingham. Winning gold was amazing and doing that in my home country was even more special. To be able to have the chance to run in front of a home crowd is exciting for any British athlete.

"There is nothing better than competing in front of a home crowd as we showed in London. The British public really got behind all the athletes and that support really helps you with your performance."