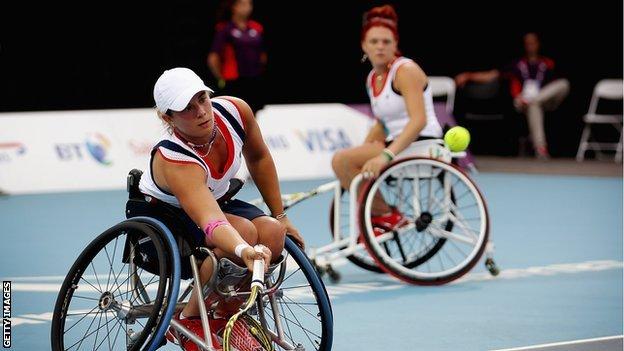 London Paralympic wheelchair tennis medallists Andy Lapthorne, Lucy Shuker and Jordanne Whiley have all been named in the Great Britain teams for next month's World Team Cup in Turkey.

He will be joined by Marc McCarroll and David Phillipson for the event which runs from 20-26 May in Antalya.

Lapthorne, who is now world number two in the quad division (for players who have impairments in three or more limbs) will be hoping to guide GB to another medal to match the silver they won in Korea last year.

With the retirement of two-time Paralympic champion Peter Norfolk from top-level sport, Burdekin (world number six) and Cotterill (world number 10) will play a key role as GB challenge a strong US side.

The GB junior team will feature Alfie Hewett, the world number one boy, and Lauren Jones, ranked number one among the girls.

The head of disability player performance for the Tennis Foundation, Geraint Richards, believes his teams have a good chance of enjoying more success this year.

"Last year was a memorable season for British wheelchair tennis and, after winning a silver medal in the quad event and bronze medals in the women's and junior events at the World Team Cup, our players went on to win two medals at the London 2012 Paralympic Games," he said.

"We have selected our strongest team again this year and we will use the fantastic efforts of the GB Davis Cup team last weekend as inspiration to challenge for even more medals in Antalya."