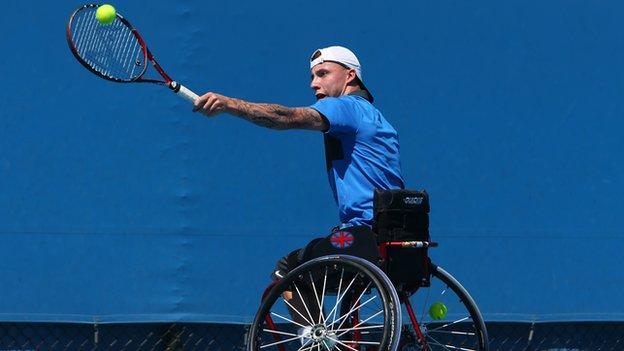 Britain's Andy Lapthorne came from 5-3 down in the deciding set to win the quad singles title at the South African Open in Johannesburg.

It is the biggest career singles tournament win to date for 22-year-old Lapthorne from Middlesex.

After losing the opening set to Sithole, Lapthorne swept through the second set and it looked like he would go on to dominate.

His opponent, however, who beat world number one David Wagner in the semi-finals, went 4-2 and 5-3 ahead in the third set and had the chance to serve for the match.

But Lapthorne broke to stay in it and then held to level it at 5-5 before Sithole served to edge ahead 6-5 and the Briton again held his nerve to force the tie-breaker.

With Lapthorne leading 7-6, Sithole won the next point to make it 7-7 but the Briton won the next two points to claim victory and his first Super Series singles title.

Reid had reached the final thanks to his first-ever win over world number one Shingo Kunieda of Japan which ended Kunieda's 43-match winning run, which stretched back to last June.

After winning the opening set against Kunieda, he led 3-0 in the second before his opponent won the next six games in a row to send the match to a deciding set.

However, Reid went 3-0 up in the decider and held on for the victory.

But although the Scot took the opening set against Houdet and led 4-2 in the second, the Frenchman recovered to wrap up victory.