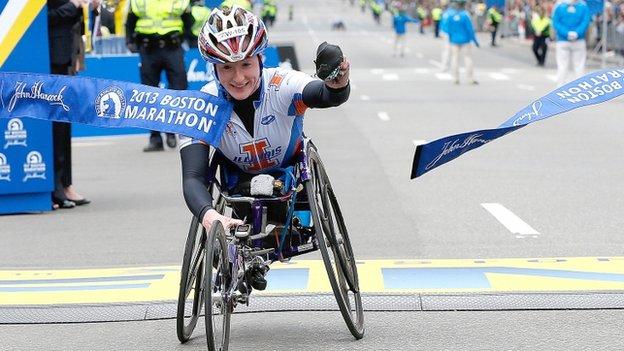 Boston marathon winner Tatyana McFadden says that she will be racing for the people of the city when she competes in the London event on Sunday.

McFadden was back at her hotel when two bombs killed at least three spectators at the Boston finishline on Monday.

"I'll be carrying them in my heart as I am running through the course in London," McFadden, 23, said.

The American was one of 24 wheelchair racers who competed in Boston before travelling to London for Sunday's race.

More than 100 people were injured in the two explosions, with several of the victims having limbs amputated as doctors worked to save their lives.

McFadden, who has spina bifida, was adopted by an American family after being born in Russia. She says she hopes to help those affected.

"It's important as an elite runner with a disability to be a role model for those who are newly injured and it's important for me to be an advocate for those," she added.

"I go to hospitals, I go to schools, I go everywhere just to talk about disability and rebirthing life.

"I've lived with many challenges in my life, every single day and so I know something of what it's like."

Japan's Hiroyuki Yamamoto, who won the men's race in Boston and will also take part in London, said that the loss of his son Kanta in 2011 in an accident involving a drunk driver made the effects of the Boston bombings especially poignant.

"I was very sad to hear about the tragedy because innocent people got killed suddenly," he said.

"If my son wants to do something, he can't but I can, so whenever I get in a very tough situation, I can do it. It is a strong motivation for me."

Great Britain's David Weir did not compete in Boston, having won April's Silverstone half-marathon in his first event since picking up four gold medals at London 2012.

However the father-of-two said that the news from the United States had deeply affected him.

"You hear that people have died, a child. I've got children myself, it's heartbreaking," he said.

The 33-year-old has won six London Marathon titles - a record number matched only by the legendary Baroness Tanni Grey-Thompson.

But Weir believes that he will face a stiff challenge to win a seventh and surpass Grey-Thompson's tally.

"I'm fit and at this time of the year I'm in better shape than I have been for a long time," Weir told BBC Sport.

"But my rivals want to beat me badly because of what I did in London. They thought they would come away with a couple of gold medals and they didn't get any."

In the women's event Paralympic marathon silver medallist Shelly Woods will be looking to defend the title she won for the second time in her career last year.

The 2013 London Marathon will also form part of the International Paralympic Committee [IPC] World Cup - for those with limb impairments - for the first time.

200m Paralympic gold medallist Richard Whitehead will compete for Great Britain in the men's T42 category, although Brazil's Tito Sena will start as the favourite.

A will be held to remember the victims of the Boston attacks at the start of the London marathon, with participants wearing black ribbons and organisers donating £2 for every finisher to the One Fund Boston to help those affected.