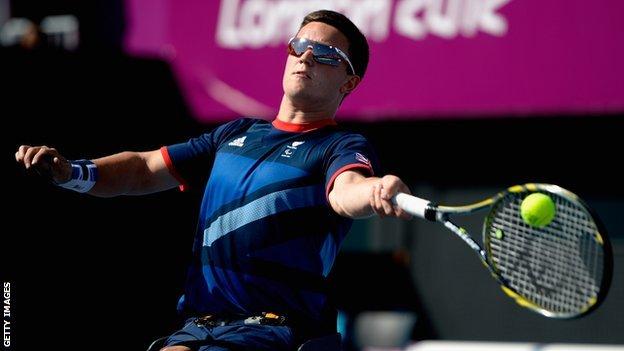 While Andy Murray is missing from the French Open, another Scot is hoping to make his mark on the clay at Roland Garros this week.

Britain's top men's wheelchair tennis player, Gordon Reid, is making his Grand Slam singles debut at the tournament and hoping to continue the run of form which has already seen him reach a career high of sixth in the world rankings this year.

The 21-year-old has enjoyed a successful start to 2013 with three tournament victories, including a first singles win over Japan's world number one Shingo Kunieda, and is the first British man to qualify for the wheelchair singles at the French Open.

"I think it is a reward for the hard work I have put in this year," he told BBC Sport. "At the start of the year, one of my goals was to qualify for my first Grand Slam singles tournament and to do it in the second Grand Slam of the year is good for me and makes the year look positive.

"I'm hoping to go out there and do my best and then hopefully also qualify for the US Open later this summer."

Helensburgh-born Reid, diagnosed with a rare spinal condition in 2004 which left him paralysed from the waist down, is a former junior world number one and has twice played in the men's doubles at Wimbledon.

With the top seven players in the world earning direct entry to the singles at Roland Garros, he helped secure his place by reaching the final of the South African Open in Johannesburg in April, claiming a landmark win over Kunieda en route.

"Shingo was the last player inside the top 10 who I hadn't beaten. It was a massive result to beat him because he had won his previous 43 matches and it was a good statement for me to send out for the rest of the year," Reid added.

"I really didn't expect to do that and also qualify for a Grand Slam by May, and it's a nice feeling to have to make new goals because you have achieved your targets.

"I've made a few changes to my training and been working with the squads at Stirling University and it is giving me more variety with my training partners. I think it is the confidence boost from having good results at the end of last year and the start of this year that has kept me going so well."

Roland Garros is one of the few tournaments on the ITF Wheelchair Tour played on clay and Reid has been preparing at the National Tennis Centre in Roehampton, but also warmed up with a win over world number two Stephane Houdet on the surface in the recent Italian Open final in Rome.

"Of all of the surfaces we play on, grass is probably the toughest because it is so hard to push the chair on but clay would be right up there and that makes Paris a big challenge. But it is the same for all of us.

"Rome was my first event on clay in three years but I've had plenty of hours of training on clay now and I should be in good condition in Paris."

As well as entering the men's singles in Paris, Reid will team up with world number five Ronald Vink in the doubles after the pair reached last year's Doubles Masters final, while Britain's top-ranked ladies player, Lucy Shuker, will also take part in the singles and doubles.