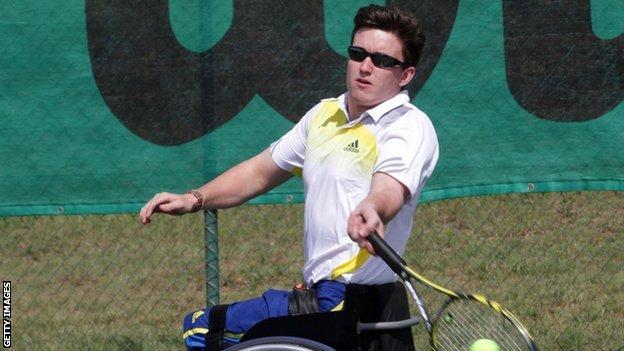 Britain's Gordon Reid edged into the semi-finals of the men's wheelchair tennis singles event at the French Open after a tense three-set battle.

Once I relaxed I was pleased with the way I played

And the 21-year-old, ranked sixth in the world, also won his doubles semi-final with Dutch partner Ronald Vink.

Reid made a slow start to his singles match and went a set down to Jeremiasz, who is ranked three places below him, but recovered his composure and, after levelling the match at one set apiece, broke serve in the 12th game of the deciding set for a famous win.

"I'm delighted to win my first singles match at a Grand Slam," he said. "It was quite an up and down match. He had a good start, but luckily I managed to turn it around and played some good tennis.

"I'm normally never nervous, but I was nervous today and he had a whole crowd behind him, so it was difficult conditions to play in. But once I relaxed I was pleased with the way I played."

British women's number one Lucy Shuker took the opening set of her quarter-final against world number one Aniek van Koot but the Dutchwoman fought back to win 4-6 6-4 6-4.

Shuker and partner Marjolein Buis, of the Netherlands, were later knocked out of the women's doubles after losing 6-4 7-5 to Germany's Sabine Ellerbrock and Dutch player Sharon Walraven.