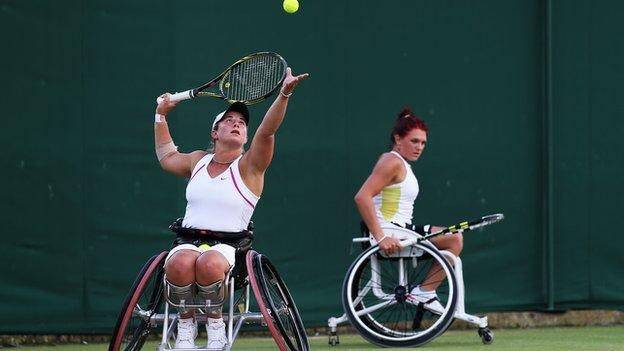 British trio Gordon Reid, Jordanne Whiley and Lucy Shuker have all been confirmed as entrants in the wheelchair doubles events at Wimbledon.

Reid will play with Dutchman Maikel Scheffers, a former winner of the men's doubles, in the event which runs from 5-7 July.

In the women's doubles, Shuker lines up with Dutchwoman Marjolein Buis.

Whiley has been given a wildcard alongside her partner Yui Kamiji of Japan.

The pair won at last weekend's Korea Open while Shuker and Buis reached the Australian Open final in January and won the South Africa Open in April.

Reid rose to a singles career high of four and doubles high of five after reaching last week's French Open singles semi-final and doubles final and will be playing at Wimbledon for a third time.

He and Scheffers have won four of the five tournaments they have played together.

The world's top two singles players Shingo Kunieda of Japan and Frenchman Stephane Houdet, both former winners of the event, are the number one seeds.

The top seeds in the women's event are the all-Dutch pairing of world singles number one Aniek van Koot and doubles number one Jiske Griffioen, who are also the defending champions.